A Meeting of One 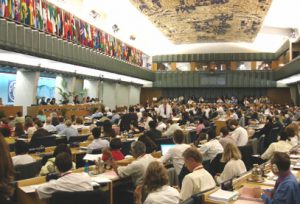 Let’s cut to the chase.  The 30th Session of the Codex Alimentarius Commission (CAC) in Rome, Italy just ended (July 2-7, 2007) and heaping platefuls of Codex standards and guidelines were advanced to their final stages as if starving people were gathered around a banquet table.  It did not matter what was heaped on the plate, it got passed to the table regardless.  It also did not matter that there were some 451 country delegation members and another 61 INGO delegate-observers from around the World in attendance or pretend attendance, the CAC Chairman, Dr. Claude Mosha, plowed forward on a one-man mission from God pushing aside any and all objections – excuse me, he called them “reservations” – that were made.  It would not have mattered if a plate of rotten tomatoes had been presented to him for approval, he would have approved them too.  In this one meeting, the Commission was rendered irrelevant as a meaningful “approving” body, for it merely rubberstamped without thought what had been done by others.  Mimi the Gorilla could have done just as good a job.

There, you have read the essence of what happened at the Codex meeting as Sepp Hasslberger and I – who comprised the National Health Federation delegation attending this meeting – saw it.  And unless you are a glutton for punishment, you need not read further.  For those of you with more time than sense, please read on.

Chairman Claude Mosha was most definitely a man on a mission. And that mission was to take that hill . . . with the hill being a pile of standards and related texts submitted by the various Codex Committees for approval by the Commission itself.  Attacking the pile like a man possessed, the Chairman considered each standard passed up from the committee level for adoption here only long enough to pronounce the words “adopted,” so that he could then move on to the next standard for its approval.  This approach was exactly the same one taken by Mosha’s predecessor chairman, except that in this case, the adoption process for the standards seemed more frantic and even hastier, if that could be possible.

As mentioned, formal objections by member states are – under Codex procedural rules – sufficient to stop progress towards adoption.  However, Chairman Mosha waved off objections by simply recharacterizing them as “reservations” and promising that they would be included in the Final Report of the meeting.  This promise really amounted to nothing more than a semi-polite way of telling the delegate to get lost and quit bothering him.

But then, what can you say about a meeting that mostly consisted of uttering the words, “And the next item on our agenda is . . . “?

After having seen how the Chairman had mistreated the few member delegations raising objections, especially the Paraguayan delegate who had raised a legitimate objection the very first day of the meeting (“The document [Proposed draft Working Principles for Risk Analysis for Food Safety] should be returned to Steps 6 and 7 since there wasn’t a broad consensus,” he had said), I could not resist approaching the Paraguayan delegate at the reception held that evening after the first day’s meeting.  I wanted to discuss with him what had happened.

He was, I told him and his fellow Paraguayans, absolutely correct to have raised the lack of consensus issue.  Under Codex Rules of Procedure, he should have prevailed and the proposed draft document should have been refused approval and returned to Step 6 or 7 (out of 8 steps, with the 8th step being the final one).  Moreover, I continued, he should stand his ground as the Codex definition of consensus is “the absence of sustained opposition.”  And the World Trade Organization itself states that consensus is reached “if no Member, present at the meeting when the decision is taken, formally objects to the proposed decision.”  He therefore had the absolute right to insist that the document not be approved.

Interestingly enough, at the next day’s meeting, the Paraguayan delegate was even firmer and more strident in his objection to a standard that was up for adoption, commenting that “the definition of consensus changes every day.”  Nevertheless, despite this member state’s clear objection, which should have stopped the standard in its tracks, the standard was approved.

Alms for the Rich

A significant amount of time was spent by the CAC leadership on the CAC budget and the need to rein in expenses.  To that end, one of the vice-chairmen chairing this portion of the meeting called for more contributions and mentioned the CAC’s idea to place a maximum upper limit on the number of committees as well as the number of meetings.

So, too, the CAC vice chairman gave a presentation on the Codex Trust Fund, which is administered by the World Health Organization and donates money to supposedly impoverished and deserving countries so that they may attend and participate in Codex meetings.   The word “supposedly” has been added in here because I noticed in the fine print of the report that the hard-working taxpayers of Europe, North America, and Australia/New Zealand have been graciously financing the participation of such struggling countries as China (with its US$1.33 trillion monetary reserves) and that insult to the African continent called Zimbabwe (whose dictatorship has murdered thousands and taken a once-prosperous country into abject beggary and misery).  One could start cutting some fat right there.

But, for an organization that, rumor has it, even bounced some of those checks given to the actually-deserving member delegations, there are simple, commonsense approaches to money management that could result in meaningful economies and the creation of a sinking fund to support CAC’s efforts.  While sitting through this part of the meeting, I could not help but think of at least three things the Committee could do to improve its financial situation.  Yet no one was asking me what I thought could be done.

Time to Run a Tight Ship

Make no mistake, the Food and Agriculture Organization (FAO) staff at this meeting could not have been nicer or more helpful to the NHF.  But, then, the NHF is a recognized International Nongovernmental Organization with recognized status to attend and speak out at Codex meetings.

Some others, such as the Natural Solutions Foundation, had been attending some Codex meetings, not as INGOs, but as members of the public.  Past Codex meetings had been incredibly lax with their security, permitting such members of the public to sit in the main arena of the meetings and to attend the Codex receptions.  Not so this year.  They and other members of the public were consigned to a public viewing section in the uppermost gallery of the Codex meeting hall and not allowed to intermingle with the delegates in the meeting rooms or at the reception.  This was strictly enforced and followed closely on the heels of the official decision of the Executive Committee of the Codex Commission to reject the Natural Solution Foundation’s application for INGO status.

“The ancient Romans,” Voltaire once wrote, “built their greatest masterpieces of architecture for wild beasts to fight in.”  Voltaire’s irony might be lost on the attendees at the Codex meeting that took place in the FAO building since it is neither Rome’s greatest masterpiece nor were there wild beasts inside.  But it was a show nevertheless.  With hundreds of observers watching, it was a one-man show.  And even more than that, it was a Meeting of One.

About the National Health Federation

Established in 1955, the National Health Federation is a consumer-education, health-freedom organization working to protect individuals’ rights to choose to consume healthy food, take supplements and use alternative therapies without government restrictions. With consumer members all over the world, and a Board of Governors and Advisory Board containing representatives from 6 different countries, the Federation is unique is being the only consumer health freedom organization in the world to enjoy official observer status with the Codex Alimentarius Commission.