Get Big Pharma out of the FDA 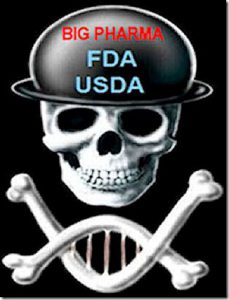 By licensing drugs that kill, and denying Americans access to effective, inexpensive treatments that work, we estimate the FDA kills of the order of 800,000 US citizens a year. Their website admits to only 100,000 ADR’s a year – deaths from drugs they licensed.

The Food and Drug Administration, or FDA, founded in 1930, has 6,000 employees, and the largest of its 40 Washington offices is at White Oak, 10903 New Hampshire Avenue, Silver Spring, MD 20993. There is no better place to start “draining the swamp.”

The directors of the FDA are big pharmaceutical company directors. There is a revolving door between the boards of both.

This means the big pharma controls its own licensing, which is why Avandia, for example, killed 83,000 before the FDA relicensed it to continue killing in February 2010, Vioxx killed 149,000, Opioids killed 194,000, and chemotherapy, a poison that maims and kills with horrific side effects, has killed 9 million since the year 2,000.

The FDA is supposed to protect the lives of US citizens; what they actually do is protect the grotesque profits of the big pharmaceutical companies, at the expense of American lives, in a complete abuse of their position.

If you put “FDA corrupt” into a search engine,  you will be swamped with examples.

The FDA is exactly the sort of corrupt Washington elite that President-Elect Donald Trump says he will destroy. He needs to consider whether the current and previous boards need murder or manslaughter charges.

There is no question the FDA is acting criminally, and must number psychopaths among its directors – ordinary people cannot kill without remorse. For the FDA, that’s easy.

The FDA has concealed, or banned, a dozen inexpensive, natural but successful treatments for cancer; none have side effects, and they are listed at www.chemokills.info. Their aim is simply to drive people into the poison of chemotherapy, which costs $60,000 a round, and from which big pharma makes $200 Billion a year in revenue. According to the Journal of Clinical Oncology, who studied 15,000 patients, chemo is successful in just 2.3% of cases.

The best of the dozen, GcMAF, has been concealed from the public by the FDA for 25 years. It has 300 scientists, 150 scientific research papers, and over 11,000 patients on it. It has no side effects and is 1% the cost of chemotherapy. It saves 60% from cancer. The FDA has closed it down on both sides of the Atlantic, using their surrogate, the MHRA, in England. See www.mhracorrupt.st.

The FDA has taken control of supplements – because vitamins (we only live 2 months without them), minerals and nutrients can do far more good for our health than drugs can. So in 2011 they deliberately misinterpreted the Dietary Supplement Health and Education Act of 1994 (DSHEA) with a draft guidance aimed at crippling or eliminating the supplement industry. They raided Dr. Jonathan Wright’s (in Kent, Seattle) and other clinics at gunpoint, to make sure the industry complied.

The FDA is the largest of hundreds of bodies in the 2.9 billion dollar big pharma lobbying system, controlled by big pharma, or with big pharma directors on their boards, doing their bidding, spreading disinformation to keep their profits at the hundreds of billion dollar level. The FDA also control drugs throughout the western world – and has killed millions from Britain to Dubai UAE, to Russia.

The FDA’s criminal activities make it a far more effective killing machine than the US Army.

Starting with Dr Jeff Bradstreet, and including Dr Nicholas Gonzales, 60 alternative doctors, who were exceptionally successful without using drugs, have died mysteriously enough that many friends believe that these brave doctors were assassinated in the last year. They are a threat to big pharma’s profits and were usually killed within a week of an FDA raid. Big pharma has the motive. No investigation has been started.

Patrick Swayze, Alan Rickman,  Farrah Fawcett, Graham Chapman of Monty Python, and probably many people you know,  would all still be with us if the FDA did not exist, or if they had not concealed GcMAF.  The FDA specialise in murder for profit.

The number one priority for everyone involved with health has to be to get Donald Trump to close the FDA down, or at least get Big Pharma permanently out of its leadership positions.