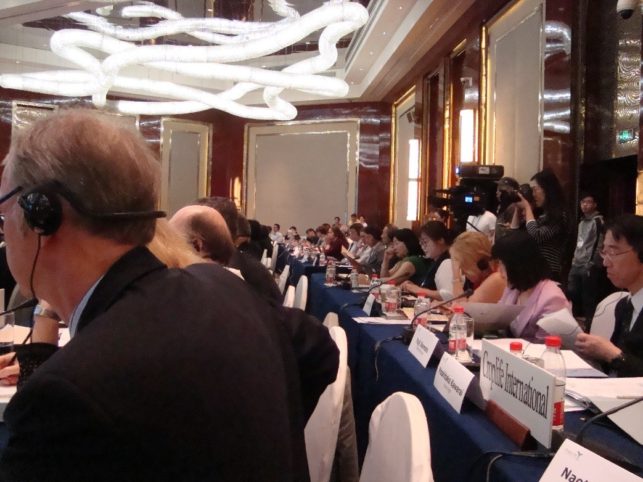 CropLife, the Monsanto-industry front group whose motto is “we never met a pesticide we didn’t like,” fills
the entire line of tables at the back of the Codex meeting room in Beijing.

NHF not only crashed but crushed Monsanto CropLife International’s usually-predictable pesticide-party when Scott Tips, President and General Counsel of the National Health Federation spoke against glyphosate and other pesticides, demanding the deluge of poison stop killing us, the bees, wildlife, aquatic life, and the entire Planet at the 49th Session of the Codex Committee on Pesticide Residues (CCPR) meeting held in Beijing, China from April 24-29, 2017.

Why is this so important? Because the decisions that are made at Codex are binding, enforceable by tariffs and fines if violated, as we move toward One World Government, politely called “harmonization” at Codex.

Over 1 billion pounds of pesticides are used in the United States every year, while approximately 5.6 billion pounds are used worldwide. No one has ever tested the synergistic and cumulative effects of these poisons in multiple pesticide exposures in the air, food and water nor considered that the safety studies submitted to regulatory agencies may be invalid and even faked. Bio-individuality is never considered; individuals have differing abilities to properly detoxify poisons.

Still, it is shocking that out of the whole World present as country delegates and industry, such as $60-billion mega-corporation Monsanto, ONLY the NHF head of delegation, Scott Tips spoke – MANY times for the consumer as the ONLY consumer and health-freedom organization in China at Codex. And guess who paid? NHF and its loyal members giving and making the sacrifice. … That’s shocking considering the devastation pesticides have meted out since their explosion into World Trade. Horrendous considering the implications for our health not to mention the health of our pollinators, animal friends, and the environment.

With all of the outrage on social media, all the marches, where is the disconnect when it comes to taking care of life-threatening, catastrophic problems where global politics are regulated – at Codex; where only NHF has a seat for health and health freedom and active participation to shape global policy for you and your family?

Of course, CropLife’s whopping 39+ representatives (the typical delegation has 2 members!) and its mesmerized regulators in Australia and New Zealand were hell-bent on advancing pesticide maximum residue levels (MRLs) to promote worldwide sales; a joke in light of Codex’s stated goal of “food safety.” Apparently, Monsanto has owned CCPR as Chemical Hill: Monsanto, Syngenta, DuPont, Dow, Bayer, and other agrochemical companies. But NHF slammed their global pesticide empire in a relentless week-long battle that culminated at the final report with Big Ag, CropLife and heavies Australia and New Zealand, trying to get our comments ALL deleted from the final report! If that had happened, NHF may just as well have stayed home like most of the delegates who didn’t speak once during the long, hot Beijing week. Yet, not only did NHF speak; but NHF fought hard to the bitter end to get the recognition of standing for NHF members and the Planet.

Now that is outrageous! NHF’s name was mentioned more times at CCPR than at ANY other Codex meeting in NHF history thanks to the hooligans on the corner trying to protect their mountain of market-share. Because so few delegates spoke out for health or even sanity despite the disastrous environmental consequences of so many pesticides in use with more to come to market, NHF took them all on in, what at times, was a 200:1 battle to the finish. Some country delegations came offering congratulations and admiration.

But where were the consumer advocates to stand beside NHF at this meeting and protect consumer health? There was the EU, Norway, and sometimes Chile; but notably absent were Consumers International (CI), the International Consumers Action Organization (IACFO), and the International Baby Formula Action Network (IBFAN), all so prominent at other Codex committees but not here. With glyphosate in the breast milk of mothers around the World, where was IBFAN? Where were the “save the bee” groups? How about Green Peace protecting the now glyphosate-filled ocean?

If they didn’t want to travel nearly 24 hours, most of it with knees crammed to chest in economy, where was the funding to have NHF’s Voice for Health Freedom there to speak for them and their members?

As Sayer Ji, founder of GreenMedInfo and NHF Vice-Chairman has said, glyphosate is poisoning our soil, destroying our gut biome, and laying the foundation for destroying our ability to produce healthy foods for future generations. Glyphosate is a deadly and persistent poison that affects more than just plant and animal and pollinator life, it harms many different aspects of the environment as well. In fact, glyphosate tops the list of poisons applied every day to plants and soil that in turn destroy humans, animals, and our environment.

An incredible 9.4 million tons of glyphosate have been spread on our fields. It is in our water table, our soil, crops, the food industry, and over 90% of Westerners have it in their bodies and even breast milk. In fact, 33% of our bread contains glyphosate, from the World’s biggest selling weed killer, Roundup®. Despite industry assurances that glyphosate is “safe” and “environmentally friendly,” there is increasing awareness that glyphosate is nothing more than a replay of DDT with its similar pronouncements of “certified safe” and “completely harmless.”

In fact, some experts attribute tens of thousands of deaths to glyphosate usage. As Scott Tips told the assembled Codex delegates on April 24th, industry and regulators claim that glyphosate is safe for humans and animals because the means by which it kills weeds (the shikimate pathway) is not present in in humans and animals. However, the shikimate pathway is present in bacteria, which dominate human and animal gut biomes. The glyphosate preferentially destroys beneficial gut bacteria, thereby allowing disease and inflammation to take hold.

And yet glyphosate is not the only herbicide and pesticide that deserves our immediate attention. A growing list of approved and even more, soon-to-be-approved pesticides was before the Committee for its consideration, a list that included chlorpyrifos-methyl. Do you recognize that name from recent EPA/Trump news, the pesticide set to be withdrawn and then wasn’t? A pesticide associated with ADHD and autism?

According to the Pesticide Action Network, Chlorpyrifos is “a neurotoxic organophosphate (OP) insecticide used in the production of fruits and vegetables throughout the U.S. … [And] has been widely studied for its neurodevelopmental effects on children.

In fact, Chlorpyrifos was prohibited for indoor home use in 2001, but it continues to be used in agricultural fields, with an estimated 8 million pounds applied annually. According to Dow, its manufacturer, chlorpyrifos has been registered for use in 100 countries for over 50 crops. Short-term symptoms of low-dose exposure may include headaches, agitation, inability to concentrate, weakness, tiredness, nausea, diarrhea and blurred vision. Higher doses can lead to respiratory paralysis and death. Pregnant women may also be more sensitive to chlorpyrifos toxicity, according to the Agency for Toxic Substances and Disease Registry. In addition to the immediate effects of exposure, chlorpyrifos is linked to a number of serious longer-term health impacts:

You bet NHF spoke out on this! 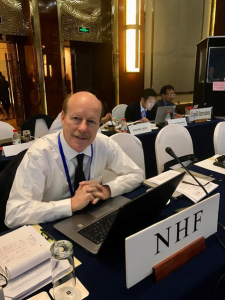 Buprofezin, teflubenzuron, saflufenacil, fluazifop-p-butyl, flupyrdifurone, and glyphosate…. This was the short list debated at CCPR. It actually went on for pages! Codex went line-by-line setting maximum residue levels without current science or considering synergistic effects and bio-individuality. Research these substances and you will find a laundry list of problems with pesticides and their residues, many of which overlap with multiple areas from endocrine disruption and productive damage, cancer-causing to neurological and serious environmental effects and more.

Take a look at Fluazifop-p-butyl – it is toxic to humans all by itself, not even combined with glyphosate, suspected of damaging fertility or the unborn child. To bees, ducks, and oysters, it lists on PubChem as very toxic to aquatic life with long lasting effects. All of these threats made the “flammable vapor and skin allergy” line look rather impotent in comparison. Consider that glyphosate is also used in tandem with many of these pesticides! On and on NHF challenged Codex delegates, defending not only you and your family but the bees (without which we die in 4-10 years!) and the environment and wildlife and insects.

Who else but NHF talked about the bees even though there was an emergency UN meeting in 2016 about their decline? No one. Only Scott Tips carrying now not only YOUR voice to Codex but the balance of life on Earth as well for consideration. In a “melamine replay” when NHF ALONE launched the grenade to save thousands of dying animals and babies from melamine contamination, so again, NHF ALONE championed – this time the bees, the Planet, and you.

One question: What if NHF had not been there? As stated earlier, decisions that are made at Codex are binding as we move toward One World Government, politely called “harmonization” at Codex.

A delegate from the Netherlands said, in the final analysis, NHF provided BALANCE. In a world of greed, an utter and disastrous disregard for health of man, beast, or the soil, BALANCE in the form of NHF’s Voice of Health FreedomTM is absolutely required. If you missed the chance to ensure representation for you and your family, to champion the Earth, save the bees, protect wildlife and the precious resource of the ocean, visit The National Health Federation’s website to send NHF to CCPR in 2018. While you’re there, if you are not a member, what are you waiting for? Join today!

The fight rages on. There are victories, such as in the 55 lawsuits filed against Monsanto in Northern California, where the court recently ordered release of Monsanto e-mails and other documents showing probable collusion between the company and the U.S. Environmental Protection Agency. And there are defeats, such as the recent decisions by the EU and Health Canada to extend approval of the weed killer Roundup® for another 15 years.

One thing is certain, however, the truth about glyphosate and other dangerous pesticides is increasingly coming to light. Its days on the market are numbered, no matter what Monsanto does. As the consumer, boycott and educate! The only question is how much longer will people, animals, insects, fish, and our environment continue to be harmed and killed before these pesticides share the fate of DDT and are discarded? Even then we know full well contraband chemicals continue to be used globally. NHF will not stop its efforts at Codex to halt the international trade in these poisons nor stop educating others of the dangers of listening to anything but firm science and common sense.