In the early 19th Century in the East and in the West, mercury was used as a medicine to treat illness. Little was known at the time about the harmful effect it had on the body. Just like blood-letting of that day, it was eventually learned that mercury over time was not a sound or safe therapy. The common name was quicksilver because of its fluid metallic property. The gossip surrounding the dangers of its use quickly made the two-word name into a one-word slang term for the treatment that became known as quack medicine when referring to those doctors administering mercury. In fact, the doctors who regularly used it for their patients were the ones known as “quacks.”

With over-exposure to mercury the body can develop tremors and nervousness. In England during the 19th-Century era, the hat factories used mercury in the processing of the felt and the workers in those horrid conditions became over-exposed. This heavy metal built up in their bodies and they soon developed what they called “hatters shakes” at that time. The gossip continued about mercury and the dangers of working in a hat factory. The famous classic novel written during that time, Alice In Wonderland, featured a wacky and nervous character called the “Mad Hatter.” 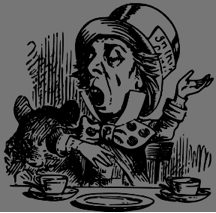 Needless to say, the wisdom of the street gossip began to associate mercury with mental illness. Soon the factory owners began to limit their workers’ mercury exposure. This was a step forward for the improvement of workers’ conditions and their lives. Will modern science and health departments teach and warn about those same dangers today? Yes, the research and warnings are there. But year after year, we seem to be exposed to mercury more than ever!

Today, mercury is found not just in air pollution and water, but in many products like skin creams on the market and people who continue to eat certain fish are getting an ample source of mercury in their bodies. Even modern dentistry still uses mercury amalgams to repair teeth. These amalgams leach mercury into the bodies of dental patients continuously 24/7. Then we have the vaccines where some are loaded with mercury and injected right into the tissues of men, women, children, and even toddlers. So if there are modern warnings of the dangers of mercury, it seems that modern science and health departments of the United States have not limited the use of mercury in these immunization programs, products, or foods. In fact, our exposure to mercury in our society keeps increasing. When it comes to the flu vaccine schedule that many people of all ages follow, the mercury levels in the tissues can rapidly reach the danger zone. Nervousness and the risk of autism increase. Consequently, I see the population becoming more and more “the mad hatters” of our modern world. Quite frankly I am shocked. 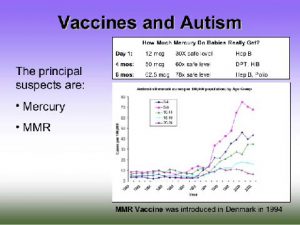 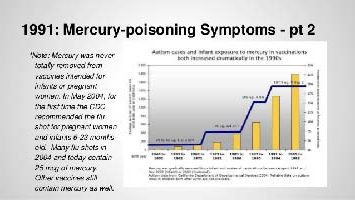 Many natural-health researchers claim that the annual flu vaccine is by far the most dangerous medical product in the World. For many years, I always maintained that chemotherapy and radiation treatments were the most dangerous conventional therapies, being far more detrimental to the body’s system than the supposed cancer-treatment benefits they provide. But soon after reviewing the data, which include alarming statistics compiled for over a decade by the National Vaccine Injury Compensation Program (NVICP), the harmful side effects of vaccines – and what a big business the vaccine industry really is – became appallingly clear.

Mad hatters or not, profits primarily drive the decision-making for, and the marketing of, vaccines. You know what they say, whenever you want to pinpoint the truth about a debatable and growing trend, just follow the money. The immunization business is an apparent racket because one agency is promoting it, but it is also colluding with and supported by the Federal government.

The NVICP maintains that the CDC – with the government’s endorsement – promotes vaccine use for all citizens, including seniors, infants, and even pregnant women. These vaccines coupled with neurotoxins are injected every year at an annual rate that is staggering and in the millions of doses. All U.S. vaccine manufacturers have been granted total legal immunity for any harm caused by their products, even though certain flu shots given to children in the United States still contain over 50,000 ppb of mercury. There are a few lawsuits and most pertaining to Guillain-Barre Syndrome get settled out of court. Nevertheless, there is a high amount of mercury in many doses and the industry has government protection from most prosecution. With these astonishing amounts of mercury, it is obvious that it has nothing to do with health and it is beyond-normal profit margins. Indeed, this is a goose that endlessly lays golden eggs.

So we now know this is big business and a monopoly of the pharmaceutical industry backed by the coercive power of the government. But just how dangerous is it? Many conditions can develop with advanced mercury exposure, but in different people it can be a different outcome. The reality is the presence of high levels of this heavy metal has a multi-tiered effect. Not only will the neurological system suffer but also the endocrine system will as well. For one thing, it is residual, meaning it cannot be flushed out of the body right away. Mercury will build up in the eyes and the kidneys, the brain, the thyroid and the liver. Thyroid problems are on the rise. Many people who have received vaccines and developed hypothyroidism most likely have mercury toxicity.

Excess mercury has also been associated with the formation of cataracts; in fact, intraocular lens implant surgeries to correct for cataract are also on the rise. With some unfortunate parents, cerebral palsy and mental retardation have been associated with mercury toxicity from vaccines in their children. These health problems do not reverse. Some horrible side effects are Narcolepsy, Transverse myelitis, and many other conditions. Conveniently, there are no long-term studies to test the safety of the influenza vaccine as the source of mercury in many of these diseases. Have we learned anything from our mistakes in the early 19th Century over 200 years ago? I am shocked to say we have not. Some countries and states like California have made vaccine schedules mandatory and because of this there are more mad hatters today than ever before!

However, there is light at the end of this pernicious tunnel. Many people who want an option in their healthcare treatments would be interested to know of a new division in the U.S. government’s Department of Health and Human Services. Established in early 2018, the Conscience and Religious Freedom Division will support the right of citizens anywhere in the United States to refuse certain treatments, drugs, or vaccines based upon their religious beliefs or conscience. For example, if the objector is Jewish or vegan and wants to refuse a vaccine because some of the ingredients are derived from pork, then they can refuse the vaccine without any problems. Or, if someone who is in a 12-step program and is clean and sober; they too can refuse any drug they wish in order to maintain their commitment to a life of sobriety. Importantly, if a parent in California decides they do not want to give their child vaccines they have a resource in the Federal government to opt out and have their family vaccine-free. What about you? Do you want your children to avoid being Mad Hatters? Are we really allowed to have more choices in our healthcare today? Finally, there is real hope. Contact the Conscience and Religious Freedom Division at https://www.hhs.gov/conscience/index.html to discover your options.