NHF’s Intervention on the Biofortification Definition at CCNFSDU, Berlin, Germany 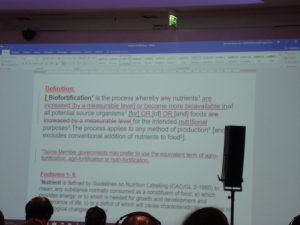 National Health Federation President and General Counsel, blasts Codex exposing deceptive practices regarding hiding GMO Foods not only unlabeled but under a “bio” label which means “ organic “ in Europe.

We were not given the timely opportunity to speak yesterday on this important topic, so I appreciate that we can at last finally speak now. In the future, I would suggest that more value can be gained from the INGOs’ unique consumer & industry perspective if their verbal comments are heard at the same time as the specific issues discussed rather than waiting to the very end of an Agenda item & even then only to be heard if time permits. IPFRI, e.g., could have offered us much insight on this issue and we would have liked to have heard IPFRI.  We ourselves had to wait 2 hours and 20 minutes, all flagged up, and never got to speak.

Having said that, on this issue of the wording for the Biofortification issue, let me first say that NHF has nothing but the utmost respect for IPFRI and its sponsor.  These are good people – trying to do good things.

But we do have concerns.  Although NHF was an early supporter of Biofortification, we have since come to see that the Biofortification concept is in the process of being HIJACKED and being converted from something good into something bad.

If Codex is to allow “any method of production” and “any source” to be part of the Biofortification definition, then Codex will be engaging in MARKETING DECEPTION of the worst sort.

Most consumers want GM foods labeled.  Consumer polls across the World have shown this to be true. In the United States alone, some 90% of consumers want such labeling and yet here, this proposed definition will seek to disguise GM foods under the term “Biofortification.”

That is DISHONEST, it is DISGRACEFUL, and for all of those sincerely concerned with the credibility and transparency of Codex, you should absolutely & positively OPPOSE this definition.

So, the National Health Federation is opposed to adding in the following wording:

(2) “The process applies to any method of production” and

On the last wording, NHF feels that letting the National Authorities determine whether GM foods are included within the definition is simply a backdoor way to include GM foods within the Biofortification definition.

I thought we were trying to harmonize the standard here. It makes much more sense for us to have a solid, non-misleading definition or else have no definition at all.

And for the reasons already expressed by the European Union, we have a problem with the term itself as the word “bio” is almost universally recognized as being synonymous with “organic.”

We also note in passing that it is a very sad state of affairs where we have come to the point in our history where we must manipulate our natural foods to provide better nutrition all because we have engaged in very poor agricultural practices that have seen a 50% decline in the vitamins and minerals in our foods over the last 50 years.  NHF mentioned this problem back at the 2005 CCNFSDU meeting.

Regardless of where we find ourselves now, however, we will not remedy poor nutrition by engaging in DECEPTIVE MARKETING practices & sleight of hand with this definition.  NHF urges this Committee to have a clear & non-misleading definition as was originally envisioned at the 2015 meeting, where the Australian delegation correctly stated that the original 2012 document on the scope of Biofortification excluded GM techniques.