It Hurts the Public While Protecting the Industry from its Mistakes 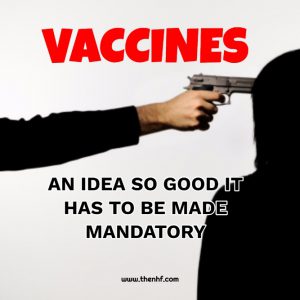 In 1986, after a four-year campaign by the pharmaceutical industry, Congress passed the National Childhood Vaccine Injury Act. It gave liability protection to vaccine makers, medical professionals, and government agencies – anyone involved in vaccination – for any death or injury that resulted from a vaccine. At that time, the Centers for Disease Control and Prevention (CDC) vaccine schedule had recommended 24 doses of vaccines for children, starting at 2 months of age to 18 years of age. From 1963-1988, the schedule remained at either 24 or 25 doses; and vaccine-industry revenues at the time were about $750 million per year.

Suddenly, though, Big Pharma saw that it had a product line for which they could not be sued, and that governments marketed for them via school mandates and by insurance incentives to pediatricians. They began pouring research and development dollars into new, less-necessary, and riskier vaccines. Almost thirty years later, after adding just a few vaccine doses to the schedule every year, the CDC’s childhood vaccine schedule has grown from 24 doses to 70 doses (at a minimum). If you had a baby today, and vaccinated him according to the current schedule, that baby would receive more doses of vaccine by the time he was six months old than most Baby Boomers received by the time they went to college.

NHF was represented at the recent CDC meeting in Atlanta, Georgia by Board of Governors member Dr. Russel Myers and NHF Public Relations Director Laira De La Vega.* They both gave compelling and challenging speeches presenting solid science to, as Robert F. Kennedy so succinctly stated, “expose the lies behind the vaccine policies that have created an epidemic of chronic disease among our children.”

There is no safety testing of the vaccine schedule as a whole. In fact, the Institute of Medicine of the National Academies has clearly stated that, “Key elements of the Immunization schedule – for example, the number, frequency, timing, order, and age at the time of administration of vaccines – have not been systematically examined in research studies.” Our children are being used as unwitting, and often unwilling, guinea pigs to test dangerous, even deadly, drug concoctions for which no one can be held liable when they cause harm.

At the same time, vaccine profits have gone from $750 million per year in 1986 to an insane $32 billion per year in 2014 and expected to reach $60 billion by 2020. Moreover, 54.1% of American children are chronically ill, developmentally delayed, and/or obese. Something is clearly wrong with this picture.

This trend continues unabated and unchecked, because despite the fact that now most applicable research shows that vaccines can cause autism (and other serious adverse health outcomes), no one can get into a courtroom in the U.S. to prove it and force policy change in this bloated billion- dollar program.

My review copy of How To End the Autism Epidemic is dog-eared and heavily underlined. It is an extremely valuable reference for anyone and hopefully copies will find their way into hundreds of thousands of libraries. The National Health Federation has arranged a direct-link discount for our members who purchase from the publisher at http://www.chelseagreen.com using the code NHF35. It is valid for 35% off J.B. Handley’s book and is valid through 12/31/2018 only, so act now!

In 2011, the Supreme Court sided with Wyeth over families who were trying to get the issue back into a Civil Court, ruling that even if a vaccine was defectively designed, they still could not sue the vaccine maker for death or injury. This closed the courthouse doors to vaccine-injured families permanently.

The greatest irony in all this is that the government has not only admitted that vaccines can cause autism, they actually list the symptoms of autism as known adverse outcomes for both pertussis and measles vaccines. They have paid out on at least 83 autism cases from the Federal Vaccine Injury Compensation Program put in place by the 1986 Act to compensate vaccine-injury victims.

The tribunals that the Act has set up are hopelessly inadequate. Since its first case in 1988, the Vaccine Court has adjudicated more than 16,000 petitions and dismissed two-thirds of them. Since 1988, over 18,426 petitions have been filed with the VICP. Over that 29-year time period, 16,555 petitions have been adjudicated, with 5,581 of those determined to be compensable, while 10,974 were dismissed. Keep in mind the CDC estimates that only about 10% of adverse events are reported. Total compensation paid over the life of the program is approximately $3.9 billion.

In the United States, it is accepted practice to lie to parents about vaccine safety and coerce them into vaccinating. Much of this conceivably comes from doctors’ failure to research or seek to understand natural immunity, herd immunity myths, and consequences of vaccines and their deleterious ingredients. Even when lies and coercion lead to the serious injury or death of a child, there is no accountability, yet insurance companies incentivize this atrocity.

It is long overdue for Congress to do the following: