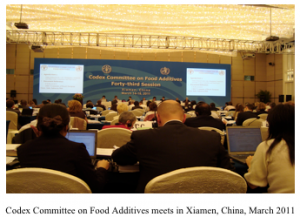 “When you drink the water, remember the spring.” – Chinese proverb

Recently, I had the pleasure of flying across half the world and back so that I could attend two different, back-to-back Codex meetings at both ends of the trip.  That was the fun part.  The hard part was reconciling the supposedly disparate concepts embodied in these two Codex committees as they worked on standards for food additives and contaminants in food.  Sometimes I wondered why the food-additives committee was approving contaminants as additives to food while the contaminants committee was doing the same.  Why, I still ask myself, did the Codex Alimentarius Commission divide the original contaminants and food-additives committee into two separate committees several years ago if all they were doing was treating every toxin as a possible food additive?

When that committee division happened, China was awarded the Codex Committee on Food Additives (CCFA), while the Netherlands retained the truncated Codex Committee on Contaminants in Food (CCCF).  As readers of this column will recall, Codex establishes global food standards in many different walks of life and, to do so, has created various committees each hosted by a different country. The Dutch host the CCCF and the Chinese now host the CCFA.  The governments for both countries get to decide where the meetings will be held and also provide their respective meeting’s chairman.

Xiamen, China is something of a coastal resort city for the Chinese. It was also the site for the 43rd session of the Food Additives committee, which was held from March 14-18, 2011, at the posh Seaview Resort Hotel.  As the delegate for the National Health Federation (NHF), I was most interested in representing consumers’ distaste for aspartame, sucralose, and aluminum as food additives, but the Committee also dealt with a whole slew of other food additives.

The last time I trod Chinese soil was at the 2008 CCFA meeting in Beijing; and, there, I was the lone voice against aspartame being approved as a food additive.  But rather than heeding NHF’s calls to rein in aspartame, the delegates actually expanded its food uses at that meeting.  NHF’s written and spoken comments simply met a solid stone wall.

Still hopelessly enamored with the artificial sweeteners acesulfame potassium, aspartame, and sucralose three years later, the Committee at this 2011 meeting unfortunately endorsed Acceptable Daily Intakes (ADIs) for these three substances at 15 mg/kg, 40 mg/kg, and 15 mg/kg bodyweight respectively.  These endorsements ignored the arguments and evidence made and presented by NHF to the Committee that the levels – if they were to be allowed at all – should be almost forty times lower. Dr. Betty Martini deserves most of the thanks for the written arguments that NHF made here, but none of the blame for the failure of this Committee to accept those arguments.

In sharp contrast, it was heartening to see that the Committee had awakened to the health risks of aluminum-containing food additives.  In 2008, only the CCFA Chairman, Dr. Junshi Chen, and NHF had any negative words to say about aluminum.  This year it was different, in large part due to the Joint FAO/WHO Expert Committee on Food Additives (JECFA) re-evaluation of the risks of aluminum-containing food additives such as sodium aluminum phosphates, aluminum ammonium sulfate, sodium aluminum silicate, calcium aluminum silicate, and aluminum silicate.  In the past, I have been harshly critical of JECFA for its faulty science; but on this issue JECFA clearly came down on the right side of the divide when it dramatically reduced the Provisional Tolerable Weekly Intake (PTWI) for aluminum downwards from 7 mg/kg to 1 mg/kg bodyweight.

Whether this change in the JECFA PTWI for aluminum was the cause or the effect of the European Union (EU) delegation’s position, I cannot say. However, the result has been that at this year’s meeting the EU delegation has actually been speaking out very firmly against the use of aluminum-containing food additives; and the unsung heroes amongst them have been Eva Zamora (the EU delegation head) and Stephane Brion, as well as the equally outspoken Hungarian delegates.  Other delegations, such as Indonesia and to a certain extent Colombia, also argued that the use of aluminum in food is unjustified and should be discontinued. NHF, as always, expressed its strong stand against allowing aluminum in food as a food additive. (Even the CCFA Chairman chimed in with his opinion, saying that “our goal is to find a way to reduce aluminum content.”

So, in the end, the aluminum standards were held back pending another JECFA re-evaluation in the near future.   With substitutes available to replace toxic aluminum in food, aluminum’s days as a food additive are justifiably numbered.  Like fish hooks and batteries, aluminum is much more useful outside the human body than inside.

With the Codex Committee on Contaminants in Food meeting due to start almost 6,000 miles (9,000 km) away in the Netherlands in a few days’ time, I quickly left Xiamen to go the other, longer way around the planet to get there since I had to stop in California first.   Arriving just in time – nine hours before the meeting was to start on Monday morning, March 21st in The Hague, Holland – I was able to participate in two major discussions about food contaminants that opening day with very little sleep. Lucky me.

The first discussion was unexpected.  Perceptive Japan had submitted its written objections to the proposed change in the definition of “contaminants” that would exclude from the definition those veterinary medicines added intentionally to animal feed and which then remained in food.  NHF was the only delegation to speak up in support of Japan’s objections and was followed by dead silence by everyone else. That was strange. Veterinary-drug residues – such as ractopamine – must no longer be a real issue to those who had argued so vocally alongside of NHF against that product at last year’s Codex Commission meeting in Geneva.  But the Chairman, Martijn Weijtens, sticking to his schedule as tightly as a wound-up Swiss train conductor, quickly shunted the controversy over to an electronic working group that will mull everything over and report back to the Committee next year.

The second discussion – on melamine maximum levels in liquid infant formula – was both expected and lively.  Melamine is a man-made chemical used in tableware, food equipment, packaging, and a few pesticides, which has poisoned and killed infants and pets alike in the past.  It is actually a very nasty chemical when ingested; and the World got along very fine without it prior to its invention.

Despite melamine’s nastiness, at last year’s CCCF meeting, NHF was the oddball out in challenging the high maximum levels for melamine in adult and infant foods, and for challenging the EU’s desire for an exemption to those levels that was so large you could drive a truck through it. This year’s meeting was different – NHF was no longer alone.

Costa Rica was among the first to come out punching. Here the issue was very specific: what should be the maximum levels set for melamine in liquid infant formulas?  The existing limit was 1.0 mg/kg of bodyweight, with the Canadian delegation saying that this should be cut in half to 0.5 mg/kg.  This Canadian position was an improvement over the existing level, but Costa Rica was having none of it.  The level, Costa Rica said, should be lowered to 0.125 mg/kg of bodyweight. The EU, Kenya, Peru, Nicaragua, Tanzania, Cameroun, the Philippines, the International Dairy Federation, and the NHF all agreed and argued similarly.  The NHF actually argued that the level should be set at zero, but recognizing that the mood of the Committee would not accept a zero-tolerance level, supported the lowest level of the choices at issue.

What really separated the men from the boys (or the women from the girls) was the related issue of the exemption.  Written into the standard was yet another one of those ubiquitous exemptions, which said in essence that the limit did not apply to any melamine contamination coming from contact with food packaging.1  So, in other words, Codex will adopt a stricter limit on melamine levels in liquid infant formulas, but the limit won’t apply to any melamine that comes from the packaging!  Great, manufacturers now have to play fair – they can only poison your infants a bare amount unless the poison comes from the container, then they can poison them a lot.  Makes sense to me.

Actually, it doesn’t; this is just the sort of overt nonsense that all too often passes for science at Codex meetings.  These are vulnerable, developing infants who need less exposure to toxins, not more.  As the NHF argued in its written comments, toxins such as melamine accumulate and do not act in isolation but with other toxins that will magnify the harm done.  In addition, research shows that infants are particularly vulnerable.2 There should be no exemption at all.  Unfortunately, only Costa Rica, Peru, Nicaragua, Tanzania, and the NHF argued against the exemption.  The others all thought it was fine or just kept silent.

So, in the end, the exemption stayed in the Standard; and the Chairman, in a bit of faux-Solomonic wisdom, rounded the maximum level up from 0.125 mg/kg to 0.15 mg/kg.  “Why,” I asked the Committee, “are we rounding this number up?  We should be rounding it down.”  A few agreed with me; but the Chairman stuck to his plan and the limit was set at 0.15 mg/kg, which still represented a victory for those of us opposed to the higher maximum levels.

This Standard is now being forwarded to the Commission itself for adoption.

The two, back-to-back meetings provided a study in contradictions.  At the Food Additives Committee, the delegates consider adding into food such toxic substances as aluminum and aspartame.  In the Food Contaminants Committee, the delegates consider allowing to remain in food such a toxic substance as melamine.  Food additives versus food contaminants – at Codex it is often hard to tell the difference between the two.  They are certainly treated the same.

The CCCF Chairman, Martijn Weijtens, certainly showed his skills as an able chairman, and I was impressed with the fact that there appeared to be greater transparency in the report of this meeting than I have seen elsewhere. All too often, NHF and other delegations’ comments are omitted from the Reports or can only be reported anonymously; but both Chairmen allowed NHF’s important comments to be mentioned with attribution. Importantly, the CCCF Chairman showed noticeable respect for the delegations, including the INGOs such as NHF, calling on them more regularly than many other committees.

Another notable contradiction or inconsistency was that during the Chinese meeting the CCFA Chairman made a ruling that if a delegate did not make its point at the pre-session Working Group meeting, then it could not raise that issue in the main (plenary) session of the Committee.  This is wrong.  At the second meeting, the CCCF Secretariat correctly confirmed that it does not matter whether or not a topic was discussed in a Working Group meeting, delegates could still raise the issue in the plenary session.  Inconsistency and contradictions can be a hallmark of any organization; the above examples just show that Codex itself is not immune.