The drug companies had a problem. They always have a problem, but this one looked huge. For some time, a Centers for Disease Control and Prevention (CDC) whistleblower had been helping Dr. Brian Hooker uncover data manipulation by the CDC that showed deliberate suppression of scientific evidence linking autism to vaccines among African-American babies. In a story that broke in August 2014, Dr. Hooker showed that, beginning as early as 2004, the CDC has known about the vaccine-autism link. That was when the DeStefano study, based on data from carefully cherry-picked subjects and already rejected by several peer-reviewed journals, was published in Pediatrics, a journal heavily funded by the vaccine industry. The DeStefano study – which “showed” no link between vaccines and autism – has been used as ammunition ever since against those who would challenge the dominant paradigm that vaccines are safe. But, now, the truth was leaking out around the edges and only getting worse. What to do? 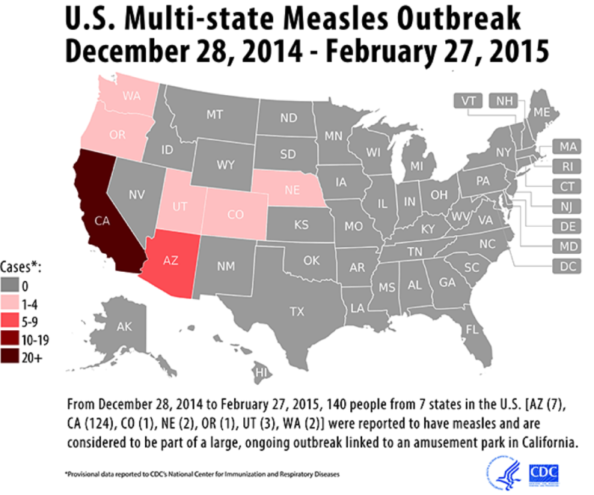 While standard drug-industry control of the mainstream media quickly clamped down on the story, preventing its spread, and the usual shills surfaced once again with articles defending vaccines, perhaps it was not considered enough. “We’re losing at Monopoly? Okay, let’s ditch that game and start playing Hooks and Ladders!” Conveniently, a measles outbreak in early January 2015 at the Disneyland theme park in Southern California served as the reason for refocusing media attention on the vaccine issue, away from safety and onto the unvaccinated.

The Land of Fantasies

Disneyland – the amusement park of fantasies – was the appropriate place to launch this latest fantasy: That all of us – but, oh, God, especially our children – are in mortal risk of dying from measles because of the great unwashed, i.e., those selfish individuals who refuse to be vaccinated with mercury and other toxic-containing injections. The outbreak was originally blamed on a single unvaccinated woman, but that claim was later, with much less fanfare, retracted by California Public Health officials.

In fact, author Laura Hayes shows that it is the vaccinated who are spreading the disease by “vaccine fallout.” “People who receive live-virus vaccines, such as the MMR, can then shed that live virus, for up to many weeks … and can infect others.”/v

So, disregarding the truth, the mainstream propaganda war is on. The typical tactics that have fooled us time after time have been trotted out once again. Whether it was to launch the Iraqi war with tall tales of hidden weapons of mass destruction or the incredible Ebola-virus threat that has just fizzled out not only in the news but in West Africa, the Hitlerian “Big Lie” never fails. Scare the public with a “threat,” any deadly threat, and they will just beg to give up their freedoms, all for a little imagined security. This time it is the measles “epidemic.”

Bring Out the Pitchforks and Torches

For many years now, all but two States in the Union have lawfully allowed parents to exempt their children from vaccinations for religious reasons, and of those 48 States, 20 of them also allow a philosophical/personal belief exemption from mandatory school vaccines. All States permit medical exemptions, although these are more difficult to obtain than the other exemptions. At the time, ample constitutional and other reasons supported the enactment of vaccine exemptions. Those reasons have not disappeared. And certainly not because a few more than 100 people caught measles in California. 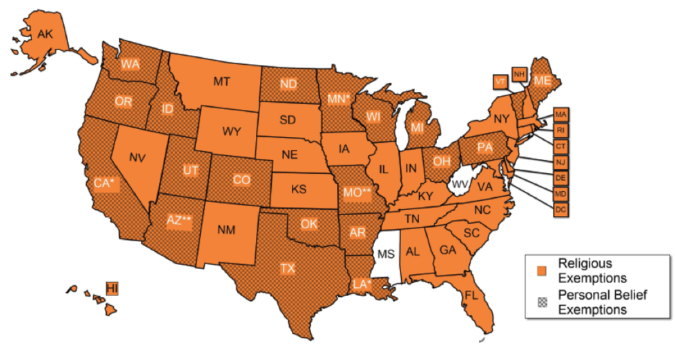 Yet, that is exactly the excuse being used for this well-orchestrated campaign to kill those exemptions in most States. Very suspiciously, across the entire land, we are confronted with the sudden and oh-too-timely appearance of a well-oiled, heavily financed, joint media and legislative strategic campaign to eliminate all but medical exemptions. And, with this, our freedom to informed medical consent and to control our own bodies will disappear. Forced vaccines, delivered by those who claim to know better than us, are the goal. You are the target.

Of course, the mainstream mantra is that this is all for the “public good.” Hysteria, emotion, and fear, all fueled by the typical one-two punch of media propaganda first and then introduced legislation second, are the currency behind this attack on the civil rights of all Americans to simply do what they think is best for themselves and their children.

The Los Angeles Times and other mainstream publications across the country have been unleashed upon us so as to scare us out of our freedom to decide for ourselves whether or not we wish to inject such toxins as mercury, formaldehyde, aluminum, antibiotics, and polysorbate 80/viii into infants with as yet undeveloped immune systems, overwhelming their young bodies with up to 40 vaccinations before they are two years old, not to mention university-age students who will be forced. Thinking parents who dare to wonder about the connection between the skyrocketing autism rate among infants/ix and the overwhelming insults to the infantile immune systems are labeled as “selfish,” “misguided,” and “a danger to the community”/x when they are the only sane ones around. And any brave doctors who dare to speak out about the dangers of vaccines risk having their medical licenses yanked. Opposition is ridiculed, suppressed, and silenced, hardly the hallmark of those secure in their “science.”

And as Spring faithfully follows Winter, legislative hearings have already taken place in Washington State and Oregon to kill philosophical (personal belief) exemptions there, while California, Maine, Minnesota, Pennsylvania, Texas, and Vermont all have bills already or on the verge of being filed to remove such exemptions. Even religious exemptions are under attack. Maryland, New Jersey, Texas, and Vermont have bills filed or announced to eliminate religious exemptions, and Illinois, New Mexico and Texas have bills filed or announced to restrict religious exemptions. All would unconstitutionally violate the First Amendment. Fortunately, the Oregon bill, first out of the gate, has also been the first to stumble and fall to strong opposition. Now, the Washington State and Maryland bills have failed as well.

Even more nightmarish, on a national level, the U.S. Department of Health and Human Services is planning on implementing its draft National Adult Immunization Plan (NAIP), which calls for all adult American citizens to be forced to receive current and retroactive vaccinations that could equal several dozen “shots” per individual during their “catch-up” phase. No ifs, ands, or buts. Clearly, the plan to remove vaccine exemptions has been rolled out in force.

Unsurprisingly, the pitchfork-and-torch bearers frequently have vaccine-industry money jingling in their pockets as they call for the vaccine exemptions to burn. Dr. Paul Offit, the standard vaccine-industry apologist, has himself made multiple millions off of vaccines. The vaccine industry has also bought and paid for the Academy of Pediatrics with millions of dollars for conferences, grants, medical conferences, and even its nice, modern headquarters.

Nor are the politicians who push this legislation paragons of virtue either. In New York, Assemblywoman Amy Paulin, the principle sponsor for the New York State HPV bill, received donations from Merck for her last campaign, while New York State Senator Brad Hoylman, who sponsored the mirror HPV bill in the Senate, holds Merck stock interests (technically held by his wife based upon his submitted ethics form). Some may also recall that then-New York State Health Commissioner Dr. Richard Daines attempted to mandate the H1N1 vaccine. Fortunately, he was “outed” when it was publicly revealed during a radio interview that his wife was a managing director for Goldman Sachs, which had invested in and was underwriting the vaccine. The proposed H1N1 mandate was soon withdrawn. In California, both State Senators Dr. Richard Pan and Ben Allen are medical doctors and long-time pushers of vaccine mandates. An entire article could be devoted simply to vaccine and drug industry influence among politicians pushing these bills.

Then, there are the heavily funded vaccine-industry front groups. Every Child By Two is an organization that promotes early immunization of children; it admits that it takes money from vaccine makers. The Immunization Action Coalition (IAC) is another front group that lists among its funders such vaccine and pharmaceutical companies as AstraZeneca, Merck, Novartis Vaccines, Pfizer Inc., and Sanofi Pasteur, who also heavily populate its advisory board along with – surprise! – Dr. Paul Offit. IAC, in turn, and along with the CDC, National Immunization Program and Department of Health and Human Services, “partners” with the National Association of County and City Health Officials (NACCHO) to push strict and mandatory vaccine schedules.

Yes, we have all of the best “public spirited” pitchfork-and-torch bearers that money can buy. The real question is whether or not the public can see beyond the hysteria of these bought-and-paid-for shills well enough to discern the truth.

Soren Kierkegaard once remarked that “the truth is a snare: you cannot have it without being caught.” So, too, with vaccine truth. Once the facts about vaccines are laid out before you, their dangers become self-evident. The short list of vaccine facts is as follows: 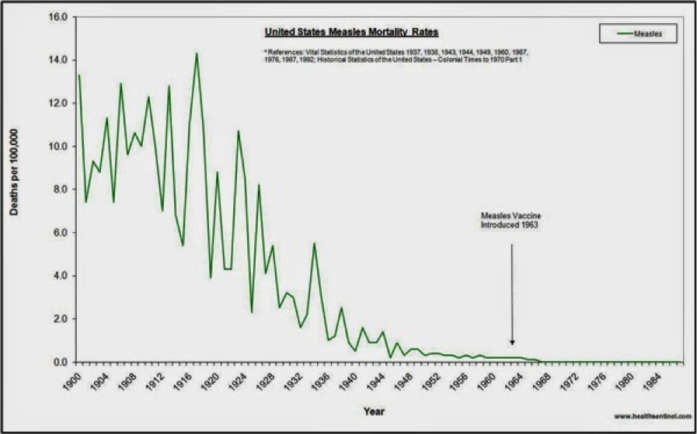 This latest and most-aggressive pro-vaccination campaign is framed around the wrong issue. Public health will not be enhanced at all by eliminating the last of the vaccine exemptions or even by lining up every last American like concentration-camp inmates and subjecting them to scientifically questionable medical injections against their will. If those who are pushing these coercive measures truly had the public’s health and not simply drug profits in mind, then they would be adamantly calling for rigorous safety and efficacy testing of all vaccines. They would be tearing down the false presumption based upon “Voodoo science” that vaccines are safe, despite decades of real-world experience, death, and injury to the contrary.

Curiously, too, many who push for these coercive “public health” measures are adamant supporters of a woman’s right to abortion and control over her body. In their world of illogic, a woman has a right to control her womb but not her immune system.

The argument here must be reframed. The issue must be about the dangers of current vaccines and the regimen of vaccinations forced too soon and too quickly upon infants with not-yet-fully developed immune systems. Exemptions are their distractions from the real dangers of vaccines. And that is the issue that must be addressed and all who refuse to address that real issue must and will be called to task. Lawsuits against these wrongdoers are being researched and may soon be filed.

As a dear friend has said when asked why he did not vaccinate his three children, “Is it for religious reasons?” “No,” he replied, “it’s for scientific reasons.”

For those of you who are Californians, if you support the basic right of Californians to decide for themselves whether or not to vaccinate themselves, then take immediate action now by signing our Petition to Governor Jerry Brown here

i See http://www.marketwired.com/press-release/study-focus-autism-foundation-finds-cdc-whistleblower-reveals-widespread-manipulation-1939179.htm. Note also that Dr. Hooker, for reasons not clearly stated in my view, withdrew his article at http://www.translationalneurodegeneration.com/content/3/1/22.

iii Jessica Glenza, “Measles outbreak spreads in US after unvaccinated woman visits Disneyland,” The Guardian, 19 January 2015, at http://www.theguardian.com/us-news/2015/jan/14/measles-outbreak-spreads-unvaccinated-woman-disneyland (note that in the comment section comments disagreeing with the author’s pro-vaccine stance have been deleted by the moderator as “abusive”).

x “Parents who do not vaccinate their children should go to jail,” USA Today columnist Alex Berezow wrote, while Los Angeles Times reporter Emily Foxhall fatuously claims that “some worry that the measles vaccine causes autism – a theory that has been thoroughly discredited by numerous scientific studies.” LA Times, January 26, 2015, p. B1.

xi All of these bills may be found on the National Vaccine Information Center website at: http://www.nvicadvocacy.org/members/National/ActionAlertDetails.aspx?itemid=649&Page=True.

xxi Harverkate M, D’Ancona F, et al., “Mandatory And Recommended Vaccination In The EU, Iceland And Norway: Results Of The Venice 2010 Survey On The Ways Of Implementing National Vaccination Programmes,” Euro surveillance, Vol. 17, Issue 22, Article 4, 31 May 2012. Europe already has vaccination rates in the 95-99% range, according to WHO.