WE WON THIS VICTORY FOR YOU,

NOW HELP US HELP YOU AGAIN 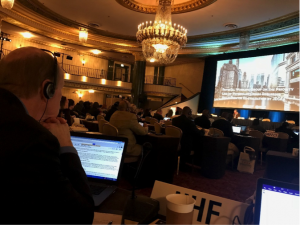 Having just achieved a spectacular and unexpected victory at the recent Codex Committee on Residues of Veterinary Drugs in Foods (CCRVDF) meeting in Chicago where your organization – the National Health Federation – was a key player in blocking the toxic vet drug Zilpaterol from being approved by Codex, NHF now prepares to attend the Codex Alimentarius Commission meeting in Rome, Italy to defend our victory.

You will laugh because Merck – the drug sponsor for Zilpaterol – attended the Chicago Codex meeting confident of victory. But they were beaten. Millions of dollars invested in their wonder-drug down the drain. Merck wasn’t laughing and its representative at the meeting became angry and vindictive and went right to work attacking NHF – whom he saw as primarily responsible for Merck’s defeat in a Codex Committee that Merck is arrogant enough to think that it owns.

So, he tried to intimidate the Codex Secretariat by showing him a photo of me with the Secretariat, as if there were something wrong with that. And he also showed the Codex scientific representatives our NHF Facebook page where we had called their science “junk science.” Then, he chortled in our ears about how “everyone here hates you now!” In short, he pulled all of the dirty stunts that one might expect from those of his ilk. And, to top it off, in an unprecedented move, NHF was even denounced from the head table by a Codex scientist who was “offended” that NHF had called him out on his industry-influenced “science.”

But, NHF had won, Merck had lost. And that’s what counted. NHF has never attended Codex meetings to win popularity contests. We are there for YOU. To protect and preserve your health, not to cozy up with contemptible drug-peddlers and their pet government regulators.

You see, like its evil twin ractopamine, zilpaterol hydrochloride (tradename Zilmax®) is a beta-adrenergic agonist (bAA) drug that is given to cattle and other food animals to take nutrients away from fat production and push them instead into muscle, creating a leaner and ostensibly more-valuable animal. Zilmax is about 125 times more potent than ractopamine. Although not a steroid, the drug does have steroid-like effects on animals and humans alike. These effects, though, can be cumulative and devastating.

Zilpaterol’s “adverse unintended consequences” is “the cumulative risk and incidence rate of death was 75 to 90% greater in animals administered the bAA compared to contemporaneous controls.” Not to even mention that, in humans, elevated heart rates, arrhythmias, myocardial infarctions, and deaths have resulted from bAA drugs in doped meat. Another study, published in 2018, confirmed that zilpaterol hydrochloride administration to cattle predisposes them to cardiac disease.

Past articles in our NHF magazine Health Freedom News speak of “downer pigs” who were shaking and sicker than the proverbial dog after Ractopamine doping. Now we know of Temple Grandin’s expose’ of Cargill and the major meat-packing houses in the U.S. where the cattle’s hooves were literally falling off and they were still being shocked with an electric rod across the line to their slaughter. Food production animals must cross that line on their own volition. And they make their way to your dinner table to poison you as well.

The point is that NHF played a key role in stopping a standard for this toxic drug from being adopted by Codex that would have permitted its sale worldwide.

And every one of YOU who are NHF members and donors can take credit for this latest victory. NHF could not have been there without your support. So, feel good about that! 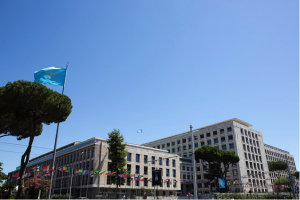 I’VE BEEN DOING THIS FOR A VERY LONG TIME NOW

I’ve been protecting you for years, an NHF member since 1986, Board member since 1989, and NHF President now for 11 years. But having recently been asked to speak as one with wisdom, of years of experience in health freedom, by the Health Freedom Congress in Minnesota earlier this month, I knew that actively shaping international/global policy is key. As I spoke to all of the representative members of American health-freedom organizations, I realized that NHF WAS THE ONLY ONE WHO WAS ABLE TO ACTIVELY IMPACT GLOBAL POLICY FOR YOUR HEALTH. And this is because long ago I obtained the seat for NHF at the global seat of power: Codex Alimentarius. This is where your health is parceled out, across international lines. I arranged for NHF to speak for you. There is literally no other health-freedom group there at Codex, not even in the parking lot holding up a sign!

When Nestle and Big Pharma buy up the raw materials for the creation of the nutritional supplements and water rights, I know we are in trouble.

When Codex aligns with Australia and the U.S. FDA in a global action to dumb down nutritional supplements’ values – the therapeutic strengths that can cure illness, then I know we are in trouble.

When insurance companies only cover allopathic doctors, trained to a rigid “standard of care” that negates common sense, protects their legal “arse,” and maximizes insurance reimbursements AT YOUR EXPENSE, all while you aren’t reimbursed for naturopaths, reflexologists, acupuncturists, nutritional therapy practitioners, and others, then I know we are trouble.

And when food is genetically modified, flying under the banner of blatant label deception (such as using the word BIO which means ORGANIC in the EU when the food is actually poisoned with GMO!!), then I know we are in trouble.

In short, I know that you need protecting and that is what NHF has been doing for over 63 years now, in many different arenas, and what, with your help, I intend to keep doing.

At Codex, NHF just stopped a toxic vet drug from entering the food system and entering YOU. Codex Alimentarius, which means “Food Code” in Latin, is the highest food-governing body in the World. Codex is where food and beverage and dietary-supplement standards are set for the whole World. Most people have no idea anyone has been fighting for them or their family! Yet, NHF has been working for your health and the health of your family since 1955 – the very FIRST health-freedom organization to go to bat against the AMA and Big Pharma, Big AG, and all the rest.

At the Codex meeting in Chicago, Merck fought back HARD. If you or your child has bacon at breakfast, turkey sandwich at lunch, and beef stew at dinner you are all most likely getting three CUMULATIVE doses of a vet drug! And you are sadly deceived because this meat is marked “all natural.” But Merck paid BIG bucks to get their questionable drug this far – millions of dollars is the norm in this rarified World – and yet NHF took them down. For you. For your family. And for the poor animals suffering the unnatural weight gain and other torments just for their owners to make an extra buck or two while creating an unhealthy World. (You can read the full report on this Codex meeting HERE. And our accomplishments from 2008 to 2018.)

This is what NHF does for you and at the risk of our reputation and our lives. We are willing to be hated because I am more concerned about protecting you and your family. My background as a lawyer specializing in food-and-drug law makes my 18 full years at Codex unmatched by country delegates or anyone in industry or as an INGO (Independent Non-Governmental Agency) as NHF is. Country delegates rotate in and out. Even heads of delegations such as the European Union do the same. So, no one really seems to master Codex or has the history to reference.

ACT NOW TO SAVE YOUR HEALTH!

NHF is dedicated to individual liberty, individual dignity, and individual responsibility and sovereignty. We have several major Codex meetings and battles ahead of us. It is absolutely urgent to act – not just to care – right now. NHF is already preparing to go next week on the Zilpaterol and other vital health issues at the upcoming Codex Alimentarius Commission meeting in July 1-6 in Rome, Italy. And after that, there are other Codex Committees NHF must attend, with the same fierce battles for your health; for your very life. We need your help to be able to go to these meetings, to speak for you as your Voice for Health FreedomTM.

Today, I am asking you to help us once again to Replenish the NHF War Chest for the upcoming Health-Freedom battle in Rome and beyond. Even though we are HEAVILY outgunned financially by the Drug Peddlers and other big corporate fat cats, and government bureaucrats spending taxpayers’ dollars, we have been able to fight effectively and constantly for your Health Freedom over the decades.

I need to please hear from you today. Then I want you to copy this letter and share it with five others – loved ones and friends you personally want to see protected and not exposed to killer-poisons in their food.

Thank you for caring and for trusting us to help protect you and your family. You are going up against GIANTS and winning!

P.S. The NHF is the oldest & best-respected Health Freedom group fighting for your health-freedom choices, access to dietary supplements, nutritional foods, and for the preservation of the small farmer and organic food producers. With your help, we can expand to help preserve Health Freedom in America, Canada, Europe, and around the Globe.

P.P.S. If you join NHF, then you will get as another benefit our flagship magazine, Health Freedom News, so unique that a Barnes and Noble rep said there was nothing like it in the World. The magazine