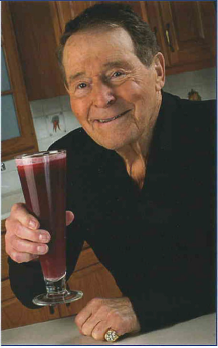 At age 96, Jack LaLanne passed away at his home on January 23, 2011, of pneumonia after fifty-two years of preaching how to obtain a healthier body to the American public.  He was a beloved icon but quite a rarity fifty years ago when obesity and ill health were not the problems of today.  He initially found it difficult to persuade the general public to climb onboard his fitness and health movement and to understand the repercussions of an unhealthy diet and lack of exercise.

Jack actually began this long journey of fitness after overcoming his own addiction to sugar.  Jack’s mother had taken him to a lecture by Paul Bragg (an early NHF supporter) who lectured on health issues such as eliminating processed foods from your diet and the benefits of exercise.  This lecture changed his life and he began a fitness regime of working out and pure food, especially raw vegetables.

He wanted to share with the public what he had learned about keeping the body fit, and that he did with his fitness television show, the opening of the first health club in the U.S. in 1936 in Oakland, California, and marketing exercise equipment.  The Jack LaLanne Show ran for 34 years with many thousands of viewers.

In his nineties, he once remarked, “I can’t die, it would ruin my image.”

There may never be another Jack LaLanne, as these are hard shoes to fill; but his legacy is carrying on and he helped many an individual to a new lease on life the healthy way.