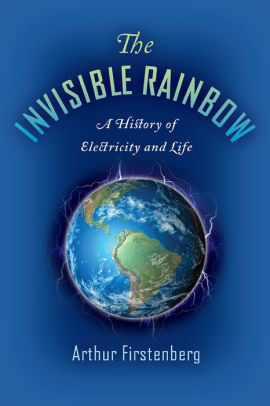 The Invisible Rainbow – A History of Electricity and Life

When I first decided to read this book, I did so because I knew nothing about electricity and because I was aware that if I wanted to have a broader understanding of electromagnetic technology, I must first gain a greater understanding of how our current technology evolved. I called upon my self-discipline in anticipation of a dry, textbook-like treatise. From chapter one, page one, I was transfixed!

What I discovered was that this book is about much more than electricity. When I scanned the title, I did not heed the last word of the subtitle – “Life.” The Invisible Rainbow does build upon the history of electricity but the major theme throughout the book is how every breakthrough in the realm of electricity, beginning in the 1700s, has been associated with ill effects upon life on our Planet – humans, plants, and animals.

The story of electricity begins in the 16th century. The author, Arthur Firstenberg, takes the reader through each discovery and advancement in the understanding and harnessing of electricity, beginning with static electricity. By delving into the idiosyncrasies of the scientists of the day, Firstenberg makes each chapter a fascinating read. He leads the reader into the social norms of the times and how the public fascination with the newly-discovered phenomenon called “electricity” shrouded what the reader views as obvious, “The fact that people could be temporarily or, as we will see, permanently injured or even killed by these experiments became lost in the general excitement ….”

Entertainment in the homes of the wealthy often involved exhibitions of newly invented electrical machines and a form of recreation known as the “electric kiss.” Because electricity was associated with the “life force,” Leyden jars were soon used in medicine followed by electrotherapy “to restore equilibrium throughout the body.” For close to three centuries, while the benefits of electricity were widely sought, the physical harm that it could cause was being dismissed. One of the unwanted effects was “istupidimento,” or mental confusion, as the Italians called it. Other untoward effects included headache, nausea, weakness, heart palpitations, muscle and joint pains, nosebleeds, mental depression, shortness of breath, coughing, or asthma-type wheezing. An excerpt from a letter written by Benjamin Franklin describes his “convulsive tremors” after exposure to electric shocks (in fact, Firstenberg fills many pages with fascinating documented personal accounts made by scientists and physicists of the centuries past).

In the second chapter, Firstenberg differentiates between direct current (DC) and alternating current (AC) and describes the battle for dominance of one over the other between Westinghouse and the proponents of direct current. AC won the duel despite its more deleterious impact on health. By 1889, 150 generating stations were in operation, incandescent lamps were in full production, railroads crisscrossed the North American continent and telegraph lines were widely distributed. It was also during this year, 1889, that a strange disease struck out of nowhere, a disease that physicians had never encountered before. That disease was influenza. One million people died during that four-year pandemic. Typical of Firstenberg, he lets the reader in on the origin of the word, influenza – “because of its comings and goings, it was thought to be governed by the “influence” of the stars.” Fun, but useful, facts such as this are peppered throughout the book. The remainder of the chapter argues that influenza is not inherently contagious, and he explains why it is seasonal and how influenza outbreaks directly correlate with electromagnetic solar flares and electrical “turmoil” in the body.

A lengthy list of physicians and scientists who made the connection between influenza and electrical activity is provided in the text. Also provided are their quotes that date from as far back as the 1800s to the current century in support of Firstenberg’s contention. In essence, these are testimonials that influenza outbreaks often occur in widely isolated locations simultaneously with outbreaks in more populated areas. The chapter ends with the bold assertion that from 1933 to the present, no proof exists that influenza is transmitted from person to person.

In succeeding chapters, using example after example, Firstenberg sets out to prove that influenza is an “electrical disease” and not a contagious disease. One entire chapter is devoted to the extermination of bees on the Isle of Wight congruent with the installation of a radio station the height of a 12-story building. Another chapter is dedicated to the Earth’s electrical current and how all living organisms are a part of that circuit. Bathing life with foreign frequencies outside of this natural range interferes with the circuitry of our brains and nervous systems. Example after example and study after study are summarized in layman’s terms with a full list of sources in the notes and bibliography totaling 158 pages at the back of the book. Before moving on to Part 2 of the book, Firstenberg also identifies porphyrins and their connection to electromagnetic environmental pollution.

Part Two of the book delves into the roles electromagnetic pollution plays in diabetes, cancer, and cardiac dysrhythmias. An entire chapter is devoted to each and is replete with case studies, scientific inquiry, and intrigue. The chapter entitled Suspended Animation explores the correlation between the effects of electromagnetic pollution and longevity. His final statement in this chapter contends that we may live longer than our predecessors but “we are less alive.”

In the final chapter, the effects of microwave pollution on birds, bees, and humans are investigated. Again, many examples are provided and well-illustrated. This is a typical metaphor from Firstenberg: “Attaching a radio tracking device to a wild animal is like giving the animal a cell phone to wear.”  This final chapter takes us to the present day; we are warned against the devastation that 5G will bring to our Planet in no uncertain terms. And, although this book was written before the COVID-19 pandemic, Firstenberg all but predicts this pandemic with his systematic approach to the topic of electromagnetic/microwave pollution and its interference with the rhythm of life on our Planet.

Arthur Firstenberg has a gift for taking a highly technical subject and breaking it down for the novice. It reads almost like a mystery novel, yet this work serves as an ideal reference book. By keeping his narrative interspersed with relatable examples, Firstenberg holds the reader’s interest without compromising the solid science upon which his work is based.