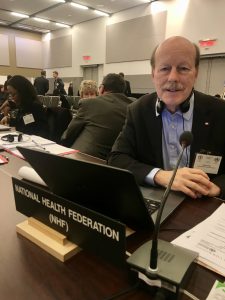 The National Health Federation delegation took its seats in Ottawa, Canada on Monday, May 13th in time to deliver two powerful interventions at the 45th session of the Codex Committee on Food Labelling (CCFL). If you have been following NHF’s work on the vitally important definition of “Biofortification,” you will be relieved to know that we won. The CCFL decided that the definition of “Biofortification” is unnecessary and will not go forward.

Remember, Biofortification is simply the process by which the nutritional quality of food crops is improved through plant breeding with the aim of making the nutrients bioavailable after digestion. To most of us, that means “conventional” plant breeding. There is nothing wrong with that. However, some had wanted to convert Biofortification into a Trojan horse that would allow GM foods to slip into those countries that currently ban such foods. Those special interests had hijacked the Biofortification definition and ruined it by amending it to include genetically engineered foods.

This hot debate item was defeated at the very first morning session. Ironically, at the Codex Nutrition Committee meeting in Berlin last December, the U.S. head of delegation had declared that its adoption was “inevitable.” We disagreed with him and kept fighting. In fact, NHF had been debating this definition with other delegations since 2012 in order to keep the meaning of organic foods from being further polluted and consumers from being deceived by misleading marketing. The European Union and certain other INGOs such as the International Baby Formula Action Network (IBFAN) were equally vocal against this definition. Nepal, which had been strongly opposed to the adoption of this definition at the Nutrition Committee meeting late last year, unfortunately could not attend this CCFL meeting.

At this most recent CCFL meeting (to which the biofortification definition had been “returned” by the Codex Nutrition Committee), I spoke up twice on the biofortification issue, arguing that the inclusion of GMO foods under the “biofortification” label would be disastrous for consumers. Additionally, I argued, among other things, that leaving it up to national authorities would dilute one of the major goals of Codex, which is harmonization of food standards across country borders, and that if the definition were to go forward at all, then it should be without GM foods included within the definition.

With the World Trade Organization having enforcement authority over Codex standards since the mid-1990s, more than ever we need assurance that the food imported from other countries is compatible with our own expectations and experience for that food item. In other words, how would you like to reach for an item you think is organic sitting on a food shelf only to find out later that that it contained GMOs? 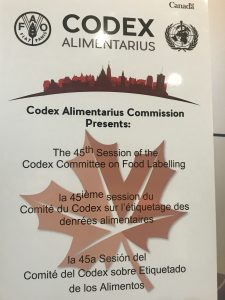 Had this Biofortification definition been adopted, it would have confused and degraded the organic market even further, creating a massive loss of consumer confidence. The proposed definition, allowing GMO foods to be disguised as “bio,” would have deceived an entire demographic of health-conscious individuals, tricking them into believing that any product marked “bio” was organic or at least healthier than standard, pesticide-sprayed plants. And in so doing, it would have undermined their health as we all know the impact of GMO foods: infertility, accelerated aging, faulty insulin regulation, organ damage, gastrointestinal, and immune system disorders, among other things.

This is what your support for the oldest health-freedom organization in the World has afforded: your representation and your Voice for Health FreedomTM taken to the global stage at Codex where decisions are made for 7 billion souls worldwide. Please continue your support as members of NHF and donors as this is but one of many Codex committees with equally vital issues that will impact your life and that will be decided this year and beyond. If it were not for our faithful members and financial supporters, these fine arguments you are witness to (there are generally no reporters here at Codex!) would not happen. Thank you and let’s keep fighting for our health and health freedom together!