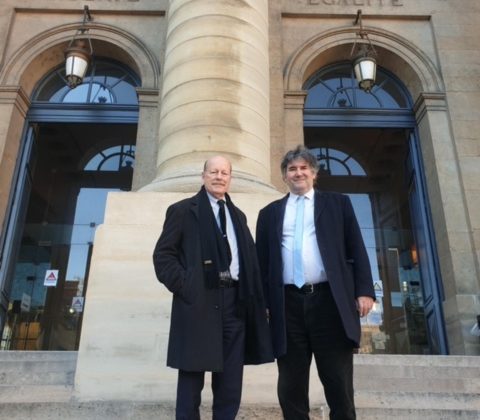 Nearly Three Years of Hell Is Over!

February 28, 2022
Today, the French Court of Appeals rendered its decision on the David Noakes appellate case. Most significantly, David Noakes was freed from the requirement to stay in France and, as of today, has departed and arrived in London via the Eurostar. He was quite happy to leave France behind.  In general, the court of appeals was more lenient with David than was the trial court. They reduced the severity of the charge significantly, which meant that he would not have to go back into prison, and they significantly reduced two of his fines (10,000 euros down to 1,000 euros, and 6,000 euros down to 3,000 euros). They confirmed, though, very unfairly, confiscation of his assets in France; and they did put him on three years’ probation with a five-year prohibition in France of being involved in a pharmaceutical business. But, otherwise, he was free to leave France and he did so promptly.  As NHF past-president Maureen Salaman Kennedy said in an inscription found in a book she wrote on cancer and nutrition, “You are all valiant warriors in a noble battle. It’s an honor to be on the front lines with you.” We couldn’t agree more.

In 2019, David Noakes, NHF’s Chairman of the Board, unfairly attacked and innocent, began the French part of his trek into Big Pharma/Crooked Court hell, which so many of you followed in spirit right alongside him. Here’s the recap: David Noakes’ team of 27 staff, including 4 scientists, and 7 doctors gave 11,500 people with chronic diseases (mostly cancer) a human protein produced by the bodies of healthy people, called GcMAF. 80% recovered. GcMAF is just 1% the cost of conventional treatments (such as chemotherapy). There are 1,310 scientific research papers on GcMAF: scientists know it works, and so does Big Pharma and the Medical Mafia. Conventional methods with poisonous drugs cure only 2.5%. In The Politics of Cancer, oncology doctors and surgeons admitted they wouldn’t subject their wives, daughters, or sisters to a chemotherapy with its ridiculously low “success” rate. Because of David’s success, the British MHRA unjustly prosecuted David in three nations; as they say, no good deed goes unpunished. One of the nations was France; neither David nor his staff ever did anything with GcMAF in France; they were completely innocent of the 9 false charges that the MHRA had invented to give to the French OCLAESP for their extradition warrant. Yet, amazingly, David Noakes and scientist Lynda Thyer spent one year and seven months in Fleury-Mérogis Prison near Paris. The government’s MHRA had two Glaxo Smith Kline directors on its board, who apparently were furious that David was potentially taking an infinitesimal amount of the $200-billion-per-year profits away from Big Pharma. The lives he was saving, as always, count for nothing with the MHRA. And as David said, the people he served wouldn’t have chosen Big Pharma “fixes” anyway because they knew better.
The French lawyers disregarded David’s 20-page statement, which showed the Prosecution had proved David and Lynda were innocent and they knew another unrelated company, Duurzaam BV, was instead guilty. The prosecution ignored the facts.
So, the Appeal Court on the Île de la Cité in Paris, France confirmed David’s served time as his sentence, but additionally fined him a total of €23,500. This was after many criminal asset seizures, including his bank account balance of £36,000, which was confiscated by the court as an additional, unjust punishment. Still, the fines were a significant reduction from what the original trial court had ordered paid last March.
The main highlight of today’s Verdict is that David, who was released from prison on December 13, 2021, but with the requirement that he remain in France, has been now allowed to leave France and catch the Eurostar train from Paris to London, effective today. He is there now, where he can continue to recover his health and build his life again from the ground up.
After years of a hell, David enjoys the quasi-freedom stained by restriction of business he is passionate about in the field that helped thousands. Still, he is free and many of you have diligently prayed, donated funds, and shared David’s story to expose Big Pharma and their crude attempt to squelch a well-documented and successful cancer therapy. We live in times when governments are increasingly corrupt, with absolute power. To have the courage to heal, to care about the lives and quality of those lives as David has, to risk everything he had and come away with his life alone, not even his health or financial assets preserved, makes one marvel at those heroes and heroines who risk all to make us well.
It is clear, from the picture below, that it will always be worth it to act despite increasing and incredible risk. It is what makes us human, activists, and committed health-freedom warriors. We are proud to call you family!