GcMAF – The Cancer Cure That Will Not Die 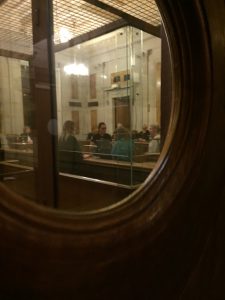 For those of you new to this nightmare story, David Noakes and Lynda (Lyn) Thyer were investigated – and David was prosecuted – in Great Britain for having cured people of cancer with GcMAF, a glyco-protein macrophage activating factor that is naturally produced in every healthy human. See www.GcMAF.se. Unhealthy people, particularly those with cancer or viral diseases, can be helped greatly with injections of very minute amounts of GcMAF. Lives can be saved and were saved – and without side effects. But the Medical Mafia wasn’t going to take that lying down.

Despite the fact that cancer patients were only helped and not hurt, the offices of David’s company were raided, vials of GcMAF seized, treatments of patients terminated leading to their deaths soon thereafter, and innocent persons sentenced to prison. For having saved thousands of people’s lives, David himself served five months out of a 15-month sentence in Wandsworth Prison in London. Lyn Thyer, in turn, was never charged in England but was ratted out by the British to the French with a made-up story of evil health “swindles” in northern France. In July-August 2019, Lyn was kidnapped by the authorities and sent off to France in handcuffs.

Notwithstanding robust scientific evidence backing the efficacy of the product (including hundreds of GcMAF research papers on Google Scholar alone), the French and British governments, through their respective agencies, have asserted that GcMAF is a fraud and a swindle. Of course they would say that, controlled as they are by the $200-billion-a-year pharmaceutical industry. Ignoring the 350 scientific papers and numerous PubMed references and scientists solidly supporting the legitimacy of GcMAF, not even to mention the hugely successful track record of clinical treatments of thousands of patients, these governmental branches of the pharmaceutical industry myopically focus on the tired, old, and discredited moneymakers that they themselves fraudulently peddle: chemotherapy, radiation, and surgical procedures that do more to kill the patients than cure them.

Unlike chemotherapy’s miserable “cure” rates in the single digits, GcMAF injections are racking up success rates of 75-100%, and at only 1% of the cost of conventional treatments. GcMAF is a real threat to the disease-care industry with which government has saddled us. And one that the pharmaceutical industry is desperately trying to eradicate before it catches on with the general public.

The industry and its regulatory lapdogs conveniently hide behind laws enacted to prevent competition, such as the Cancer Act of 1939 in the UK, which outlaws advertising any treatments other than chemotherapy, surgery, and, later, radiation. Just imagine if the pharmaceutical industry had had this kind of legislative clout centuries ago in 1215 and had enacted the “Leeches Act of 1215,” outlawing any medical treatments other than leeches. And imagine further if that ill-begotten law had endured until today. What kind of medical advance would have been throttled and killed during all of those many centuries? How many innocent people would have needlessly died just to protect the leech industry?

Well, that is exactly the circumstance that we all face today with the 1939 Cancer Act. Our lives and those of our loved ones are being held hostage by the cancer industry simply so that it can continue to stuff its pockets with money gained through fraud and swindle. They are the real frauds and swindlers here, and the government agents who enable them to defraud people are just as guilty of suppressing GcMAF’s valid, peer-reviewed science and clinical success.

The NHF legal team in Paris had sprung Lyn Thyer from prison on Sunday, December 8, 2019. I was there, waiting for 3-1/2 hours in the miserable cold and rain at the Fleury-Mérogis Prison in the southern suburbs of Paris, to take her away from there. She came out weakened but in high spirits. Even though Lyn stayed in France and dutifully showed up for all three of her court appearances in the week that she was out, such compliance seemed to count for nothing.

In a stunning and shocking reversal on Monday, December 16th, the French Court of Appeals ruled that rather than do justice they would rather hold GcMAF scientist Lyn Thyer hostage in prison in an effort to entice David Noakes to surrender himself to French “justice.” The Justices listened sympathetically to NHF attorney Chloé Arnoux’s arguments, even apparently agreeing with some of them, but then peremptorily ruled against her and ordered the gendarmes to arrest and handcuff Lyn Thyer and escort her back to prison.

Given Lyn’s rapidly deteriorating physical condition since her prison ordeal began many months ago, this made absolutely no sense to imprison her and indeed has set off protests against the French government for having done this injustice to her. The French Court of Appeals evidently found the December 12th decision of the EU Court of Justice in another case persuasive, when the latter decided that European arrest warrants issued by prosecutors were valid despite the EU Court of Human Rights’ clear-cut decision that they were invalid.

Sadly, then, while others were celebrating Christmas, Lyn had to spend hers in a miserable, overcrowded prison. Food and nutrition there are minimal and the cells are cold, especially at this time of year, as you can easily imagine. Escaping even through sleep is impossible as lights are turned on every hour all night long in the guise of “bed checks.” Sleep deprivation is a form of torture! Lyn’s health, both mentally and physically, is not good. Please write her your words of support at: Lynda Thyer #454951, MAF de Fleury-Mérogis Prison, 9 Avenue des Peupliers, 91705 Sainte-Geneviève-des-Bois, France. (Please note that her prisoner number has changed since her release on December 8th.)

There is no justice in France, England, Canada, the United States, or really anywhere these days. The practice of Rule of Law slips away from us at an accelerating speed. The Elite get away with murder and are never punished while the rest of us must contend with shrinking boundaries of freedom and stiff penalties and imprisonment should we transgress them even in the smallest way. As the trend forecaster and author Gerald Celente said, “Justice now means ‘Just Us.’” It’s all about what is good for the Elite.

Just look at Lyn and David’s cases. Jean-Luc Gadaud is the so-called investigative judge in their cases and has dealt with them harshly and with indignant, even self-righteous, anger. However, within the same time frame, “Judge” Gedaud was also named in October 2018 as the investigative judge on a case in which a giant French dairy company called Lactalis was accused of poisoning thousands of people with Salmonella contamination in 83 countries. Strangely enough, after 14 months of investigation, and despite Lactalis’ belated admission of wrong-doing including a nine-month delay in informing the French authorities and a subsequent massive recall of 12 million boxes of powdered baby milk from the marketplace, Gadaud did not imprison a single wrongdoer! Yet, in the GcMAF cases, where Lyn and David are innocent of any wrongdoing in France (or anywhere else for that matter) and even saved thousands of lives, this Judge wants to throw both of these heroes into prison (as if this would eliminate the hard science in support of GcMAF), and for a very long time. Yes, justice in France is really nothing more than something just for the Elite, not for you or me.

The NHF legal team in France is acting as quickly as possible to obtain Lyn’s final release from prison, but it cannot happen before the end of this year unfortunately. I spent the entire day meeting with Lyn before the December 16th hearing and then again meeting with her and David’s attorneys after the hearing in a meeting that lasted long into the night. Lyn has not been forgotten and our legal strategies to obtain her freedom are progressing.

NHF thanks all of you who donated and wrote for your financial and moral support!  But, please believe me when I say that we still need your support. Please help Lyn and David, who themselves helped so many others. Donate for their legal defense at https://thenhf.com/join-us/make-a-donation/. Let’s make it “Justice for All” and not simply “Just Us.”