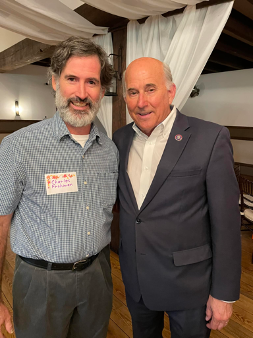 There has been so much happening around the World, and so quickly, that it has been a challenge to keep our members current. However, our monthly NHF Zoom meetings, hosted by Alex Landry and me, are not to be missed for those wishing to keep on top of current events. And the following information should help you too.

While NHF President Scott Tips fought against Codex-proposed environmental farm controls as potentially toxic, a weak limit on glyphosate contamination, and a first salvo on insect food standards, I, as NHF lobbyist, continued advancing a national campaign against global government – one opposing the ceding of U.S. pandemic sovereignty to the World Health Organization (WHO). In that campaign, we added opposition to the nationalization of State vaccine tracking. The NHF’s October monthly Zoom meeting indirectly discussed these threats via a conversation on what health freedom promises to extract from politicians in exchange for their vote.

With so much pain caused by the coercive vaccine mandates, NHF went further than any other health-freedom organization in addressing this problem by getting a bill (H.R. 5816, the NICE Act) introduced in Congress to allow avoiding mandates for ANY vaccine. This bill would also fix corrupt vaccine science by requiring proper unvaxxed placebo studies reporting as well. We were able to get Congressman Scott Perry (R-PA) to introduce this bill re-imposing Pharma liability for vaccine harm, a huge long-time goal for the health-freedom movement. Since studies like Dr. Lyons-Weiler’s show the massive chronic-disease epidemic caused by the vaccine proliferation resulting from Pharma’s liability immunity, it is unsurprising that the sponsor of the latter bill was FBI-swatted soon after the last Presidential elections. With the vaxx-caused Autism epidemic exploding by 50% just since 2017, it’s urgent that we pass both bills – or get each one reintroduced next year in the new Congress. On COVID-19 itself, we also initiated campaigns to ban viral weaponization research and to hold a COVID-19 corruption investigation that would be independent enough to escape the sham label.

On May 3, 2022, I initiated on behalf of NHF a bi-cameral coalition of U.S. Representatives and Senators (Cruz-Posey-Gohmert-Duncan) to protect toddlers from the dangerous COVID-19 vaccinations, helping (with input from NHF counsel Greg Glaser) to author a letter opposing the FDA’s and CDC’s EUA (emergency use authorization) extension of the COVID-19 shots to children younger than 6 years old, down to 6 months old. NHF led the effort to solicit co-signers and suggested a follow-up letter with “questions the FDA won’t be able to answer,” for a subsequent letter to be sent shortly before the expected June 2022 decision by the FDA. In my opinion, this effort is significantly stronger than the efforts of other health-freedom organizations, which merely submitted comments to the bureaucracies in the normal regulatory process.

Given the excess levels of disability and death that insurance companies are reporting from the mandated experimental injections, NHF felt it critical to force Congress to get involved in stopping the FDA’s rubber-stamping efforts for Pharma. With 18 co-signers on the bill that NHF helped solicit, on June 8th, our bi-cameral congressional group sent the second letter with its tough questions to pin FDA into a corner on its crime against humanity. Vaccine-tech inventor Robert Malone, M.D. approvingly covered these tough questions in one of his Substack articles. Rep. Gohmert even testified at the FDA meeting to remind FDA and drive home the point that Congress was demanding a higher bar than FDA seemed to be demanding of Pharma. Despite our efforts with Congress, FDA performed its typical rubber-stamp approval. With FDA approval, the CDC later added the COVID-19 shot to its already-lengthy Childhood Schedule – which brings liability immunity in perpetuity. NHF is urging once again all of its supporters to send our letter to Congress opposing such approval by both the FDA and the CDC.

Given the success and momentum of our congressional vaccine coalition, we wanted to oppose Pharma at every opportunity going forward. Novak Djokovic’s expected public exclusion from the grand U.S. Open tennis tournament in August 2022 provided one of those chances. Staff for Congressman Gohmert’s office liked NHF’s idea to generate another one of these letters to help unvaccinated visitors like Novak fly into our country. With over half a dozen co-signers, the August 1st letter garnered coverage in the Daily Caller.

Ever since the passage of the Dietary Supplement Health and Education Act (DSHEA) in 1994, Pharma has been bribing its puppet politicians to subject any post-DSHEA supplements to regulations that would bar them from the market. In a bill this year to re-authorize Pharma’s user fees paid for FDA rubber-stamping of drug approvals, Senator Durbin sneaked into the bill a requirement for supplement manufacturers to submit any new ingredient to a public FDA list. The danger lies in certain language in the provision allowing the FDA to potentially bar from such a mandatory list any supplement that the FDA decides does not meet its politicized definition of a “supplement.” This conflict could bankrupt manufacturers of those supplements under scrutiny from the FDA, such as NAC or CBD. NAC, coincidentally, is a known COVID-19 treatment. CBD products can threaten too many Pharma prescriptions. All in all, this new regulatory burden is expected to cost the supplement industry some $20 million (all of which would be passed on to consumers in higher supplement prices).

NHF was proud to help its friends at the Natural Products Association convince 15 members of Congress to co-sign a letter urging deletion of Durbin’s Listing requirement. We hope that supplement supporters will keep asking their Representatives to oppose this list mandate since Senator Durbin has threatened to hold hostage any remaining “must-pass” bills unless they include his Mandatory List proposal.

Informed Consent Does Not Apply Only to Vaccines

It also deals with any other uninformed and unagreed upon physical experimentation or abuse on unsuspecting human beings, including the inability to refuse deployment of harmful wireless antennas outside our bedrooms, offices, and classrooms. NHF has sought bills and hearings to mitigate wireless radiation harm, the danger of which was tacitly admitted by the government on June 23rd when the Biden administration extended compensation to diplomats for their injuries from sonic weaponry. Yet, so far, only the courts have slowed down Telecom’s rogue and mindless deployment of countless 5G antennas outside our bedrooms, offices, and classrooms.

NHF also recently co-signed two regulatory submissions on behalf of Americans disabled by wireless radiation. We urged the Federal Communications Commission (FCC) to accommodate electro-magnetic sensitive individuals by replacing the rogue deployment of local barrier-ignoring antennas with “fiber to the premise.” The FCC is requesting comments on how to make the new infrastructure law “inclusive.”

The other disability submission went to the U.S. Environmental Protection Agency (EPA), which seeks input on reaching greenhouse emission limits (from which the Telecom industry is currently exempt). We urged inclusion of Telecom, whose wireless build-out will use an increasing proportion of future energy. Wireless radiation emissions are deemed a pollutant, and pollutants need to be reduced and even completely eliminated wherever possible. NHF’s monthly Zoom meeting in November will include as a guest speaker a member of New Hampshire’s Wireless Risk Commission, to talk about what bills we could promote to achieve wireless informed consent.

Knowing that educating the mass of Americans getting health expenses paid by employer-based health plans is the key to gaining adherents of health freedom, NHF supports bills to expand self-insurance via Health Savings Accounts and liberalize care-service provider licensing, so as to enable the growth of the integrated care market.

Before NHF supporters vote for any politician, we urge them to submit our NHF candidate questionnaire to them for explicit answers that will make them go on record about their stand on health-freedom issues important to everyone. This link –  https://national-health-federation.rallycongress.net/ctas/candidate-questionnaire?iframe+1 – includes instructions on how to connect with their challengers.  Getting politicians on record will ease the challenge of knowing whether to give them our support.