From Ft. Lauderdale, Florida to Tampa in mid-November, the National Health Federation logged some significant freeway miles connecting with current NHF Advisory Board members and new NHF reps in the “sunny” State. I say that tongue-in-cheek as the torrential downpours in Miami revealed freeways with Niagara Falls cascading overhead; zero visibility. Luckily, I’m used to navigating monsoons being from Western Washington. Later, Florida redeemed its reputation the further north I drove and the Sun emerged as a formidable force. Did you know if you take 10,000 IU vitamin D3 a day for a month, you won’t burn? Well, I burned a slight bit…

As published in the Fall issue of Health Freedom News, NHF is enjoying much growth adding NHF representatives in Florida after adding several from Texas in September and Graeme Watters joining the NHF-UK team in Scotland. So, what do NHF reps do? Whatever their talents suggest and wherever their initiative leads them. Dr. Ali Miller, East Texas NHF rep, and her associate Carli Vogler, are researchers and nutrition educators who will provide valuable scientific data for Codex comment submissions. Sergio Campos, North Texas NHF rep is a membership-mogul and is translating materials into Spanish to serve this growing health-freedom community. The comradery and close friendships borne of being in the trenches on the front lines together is irreplaceable and the caliber of volunteers coming into NHF right now is impeccable. Iron sharpens iron; we all feed off one another’s energetic enthusiasm driving health and health freedom to new heights and impacting billions of lives around the World. Being on a path of service using the well-respected vehicle of NHF is one fulfilling life! This month, Florida yielded quite the cache of new reps to share this deeply satisfying way of life with. Beginning in Ft. Lauderdale, dear friend and NHF member Xian Armenta and I had a lot of great time together, which began by waiting in line 55 minutes at Fox Car Rental at 10:30 at night with only two people ahead of us (never again Fox…) where I learned about “customer service” in South Florida…this was after trying to locate it. Of course, it couldn’t conveniently be located at the airport; that’d break Fox’s “customer service” standard they set in Florida. Xian gave up his birthday weekend to accompany me on all my appointments, helping negotiate traffic, toll bridges, and unfamiliar territory. The following day, we drove to meet with Carla Sanchez, new NHF rep based out of Parkland. She was working in South Beach so we met for a healthy long lunch with stimulating conversation while the streets flooded and the rain came in torrents. Carla is Venezuelan and speaks fluent Spanish. She showed interest in attending the Codex Committee meeting for Latin American Countries after her life slows down; she’s getting married in a month and meantime had sports-model photo shoots in Puerto Rico to complete as well an airline commercial. Have you noticed the busy people are the ones most apt to serve? 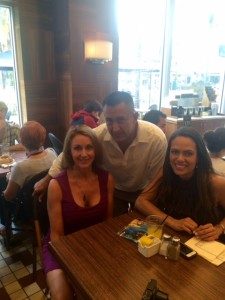 Carla, creator of OrganicLifestyle TV, is committed to health and health freedom. We first met in June of 2013 when she filmed a health-freedom documentary featuring Scott Tips, Sayer Ji, and me in Hollywood, Florida. That film is still in production, yet to be released; but her talents both in front and behind the camera are boundless. Carla is anxious to share her video talents with NHF, building our growing video collection and educating our members on the health benefits of clean eating and a healthy lifestyle. Additionally, Carla will consider creating and administrating a Venezuelan Facebook page – after the wedding. NHF is an international organization despite the historic word “national” in the name. As you know, the NHF was the original food activist before the term was coined. We will celebrate our 60th year as the original health-freedom organization pioneering health freedom. If you’re in the Woodland Hills, CA area January 31st please join us! Call the NHF office for details quickly as tickets are very limited: 1.626.357.2181. 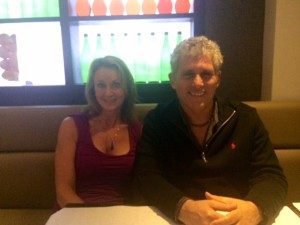 Xian and I drove back to Ft. Lauderdale where NHF Advisory Board member Jay Newman treated us to a lovely dinner and engaging conversation. The next morning, back on the road again, I headed to lush Naples to meet with Sayer Ji, founder of GreenMedInfo.com and one of NHF’s most active Advisory Board members. Sayer’s research has been invaluable to NHF for Codex comment submission and in writing articles for publication. As NHF heads to Bali, Indonesia this week for the Codex Committee on Nutrition and Foods for Special Dietary Uses, Sayer’s research on follow-up formula has already been integrated into the comments submitted to Codex for consideration as NHF seeks to eradicate the GMO contamination in infant formula. And as reported in the Fall issue of Health Freedom News, Sayer will be involved in attending Codex as part of the NHF delegation in 2015. 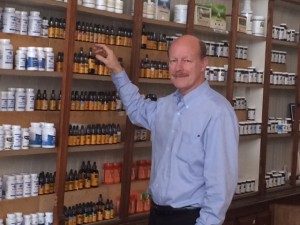 Back home, NHF President Scott Tips has been working hard crafting arguments he will present at Codex using all his legal experience as a food and drug specialist lawyer to protect our supplements from degradation by reducing their therapeutic value. Comments have now been submitted and we’re ready to fight. 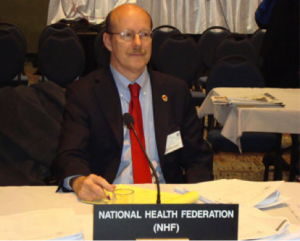 Scott has been at this particular battle longer than I’ve been working with NHF. He’s protected most of us – our health and our freedom – before we even knew we had a need for protection. That is the beauty and power of NHF…. If you haven’t contributed toward expenses for NHF’s attendance to speak on your behalf, please do so. We don’t get support from any other arena than our members and donors. Certainly not from the government. So if you can chip in, that is exactly how we get there to represent YOU: DONATE KNOW

Sayer and I accomplished more in the car waiting on Indian food than most people realize in a lengthy board meeting. His focused brilliance is overwhelming and I felt so fortunate to be on the receiving end of some great advice for NHF. Sayer suggested capturing his rapid flow of ideas on my iPhone. I realized, listening back to begin to transcribe notes to share with NHF President Scott Tips, Sayer’s massive amount of detailed information will enable NHF to provide better member service as we grow. As most of you know, we’ve been plagued with website hacks and IT staff coming and going like sets of ocean waves. Later, Sayer and I enjoyed Indian food surrounded by his young family. NHF business naturally gave way to two sweet spinning dervishes dancing to the soundtrack of “Frozen.” Sayer broke out with one of his famous drumming sessions some of us have seen on Facebook videos. Suddenly, I found myself inside of a painting I’d viewed many times. This time Sayer was accompanied by his 2-year-old Sienna. I left with several drawings complete with my name and picture drawn into the rest of the family portrait and I felt like family. The young artist? Sayer and Lisa’s 5 year old daughter Bella and I appreciated her lovely gift to remember the magical night by. Being inside of their home, surrounded by children and family, proved a priceless, irreplaceable interlude in the midst of sterile hotels and freeways. That’s what family is about. 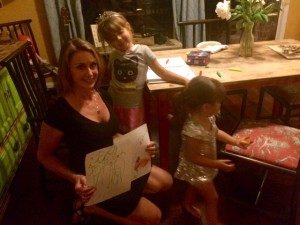 After a rather long drive to Tampa where I entertained myself listening to James Rickard’s “Currency Wars” on Audible and watched huge birds of every variety hunting along the freeway in jungle growth quite reminiscent of Belize, I had the great pleasure of meeting with Joseph Delgado, new NHF rep in Orlando. He was kind enough to spare me more driving by meeting me at my hotel and even followed me back to Fox (of course, they couldn’t be conveniently located at the airport here either…) to drop off the rental car. Joe is a Puerto Rican powerhouse, a force to contend with. His ideas are visionary and he has the discipline and drive to bring them out of the ethers and ground them into an action plan. Joe has an essential-oil distributorship through Young Living; so, he’s already well versed, after 17 years in business, in health and now is passionate about protecting health freedom as the FDA cracks down on oils. We had a morning appointment that stretched into afternoon as I moved other appointments back to capture every bit of time with Joe possible. From hotel poolside to dining room, we escaped the now searing sunshine to continue strategizing our work together. Joe is an activist since age 9 when he sat in the street protesting a dangerous intersection where his friends lost their lives. Now his activism focus is trained on the FDA. Joe realizes the leverage of coming under the umbrella of protection that NHF affords as he seeks to protect the right to educate others about essential oils and even to use them; citronella and peppermint coming under FDA attack lately. 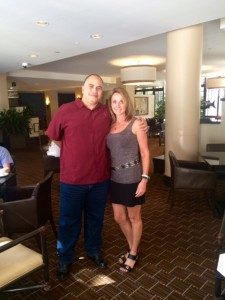 Because of a strong libertarian political background and his past work as a paralegal, Joe is considering helping NHF with its political monitoring. Everyone has different talents they bring to the growing family of NHF. I boarded the plane for the long flight back across the country and was met with an ice-storm in Portland and a windshield with more ice on it than I’ve ever seen (think thick, bubbly shower door…) and, alas, no driving until a little hole of clarity could be cleared in the windshield. Arriving home at 4:30 a.m. East Coast time, which I was still on, I greeted a wedding party setting up at 10 a.m. Most of us have other jobs. And like our NHF reps, we know how to be very organized the busier we get in order to get them all done. Sometimes we lose some sleep but we gain the satisfaction knowing we’ve done our part to help others. Despite the hard drive home on sheets of black ice, the warmth of the friendships revisited and created anew makes me realize how much I love NHF both for what it stands for and for the privilege of changing the World with other like-minded individuals. We are a growing family and these issues we face are faced as a family with everyone pitching in and doing what they can. Carla Sanchez said it best speaking of her own large Venezuelan family, “It’s not just my problem, it’s everybody’s problem. The whole family gets involved.” And so it is with NHF as we grow and add more to our wonderful global family. Each precious NHF-family member I left behind remains in my heart and we remain in close touch as friends and as activists. This adds so much richness to all of our lives.

Driving home, I saw a sign on the back of a big truck that said, “I make a difference!” That’s it in a nutshell, the answer to “what does an NHF rep do?” We make a difference and it feels right. The close-knit family, unlike most big, old organizations, is an unexpected perk and one that distinguishes the National Health Federation from most other health-freedom organizations. We’re family and activism is a family affair and each of us is making a difference; one that impacts billions of people on our Planet.