VICTORY in NHF’s Fight to Free the Innocent Lynda Thyer

A win in the war for a cancer cure 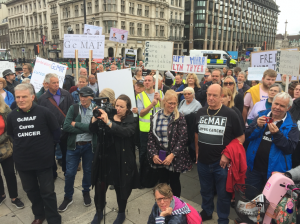 A Parisian court, ruled over by a tough but fair judge, has ordered the French government today to release biochemist Lynda Thyer from prison, where she has been held since being kidnapped from England last August on a completely illegal European Arrest Warrant (EAW). The National Health Federation (NHF) retained the French criminal-law specialist attorney who won the court hearing today by arguing strenuously that the French government was acting illegally under European Union law, especially where the European Court of Justice is challenging the validity of the EAW because in France it is issued by a prosecutor and the prosecutor is not an independent judge according to required European standards.

Ms. Thyer will be released on Sunday, December 8, 2019, unless the government appeals and wins in the Court of Appeals. NHF’s legal team, which has won previous high-profile cases in France, has every intention of winning and forcing the government to free the innocent Lynda Thyer. This could turn out to be a landmark case since its outcome could affect every other EAW issued by French prosecutors.

It’s All About the Cancer Cash Cow

The $200 billion-a-year cancer industry has never liked competition. It would rather people be maimed, in pain, and die than lose this cash cow to competitors with a solution. GcMAF – a Glyco-protein Macrophage Activating Factor, naturally made in every healthy human – is one such solution and a very effective one.

If used in the UK’s medical system, it could save 120,000 lives a year. In North America, it could save a much larger number of lives. GcMAF has negligible or no side effects, is not dangerous, and costs only 1% what chemotherapy costs. In the UK, pharmaceutical corporations make £40,000 off of each round out of poisonous chemotherapy (100 times the cost of a GcMAF injection); and regulatory agencies around the World are protecting these ­huge profits at the expense of human and even animal lives.

GcMAF was discovered in the human body in the 1980s by some 20 scientists and researched in the 1990s by Dr. Yamamoto. Except for the National Health Federation, which publicized GcMAF’s existence as early as the Fall of 2008, and then continued to follow up on this important story thereafter, the general public has been left in the dark about GcMAF for some 25 years. Yet, GcMAF is one of the great stories of the Century. There are now 300 scientists, 150 peer-reviewed scientific research papers (half of which are re-published online with the U.S. National Library of Medicine), 350 doctors, 9,000 successful patients behind it, and at least 500,000 followers on YouTube.com.

Unfortunately, the UK’s Medicines and Healthcare products Regulatory Agency (MHRA) and France’s Office Central de Lutte contre les Atteintes à l’Environnement et à la Santé Publique (OCLAESP), both of which are controlled by the pharmaceutical corporations, are determined to stop the use of GcMAF, because they are afraid that GcMAF will put chemotherapy and other medieval cancer “treatments” out of business.

In England, David Noakes and his company (Immuno Biotech Ltd.) both became powerless to help cancer patients when their bank accounts were closed by the MHRA and the business shut down in mid-2015. At least 200 patients died when their supply of GcMAF was suddenly cut off. David himself served five months in Wandsworth (London) Prison until he was released in late April 2019. He is currently under an illegal extradition order to France, but has not yet been extradited.

Biochemist Lynda Thyer – a highly skilled GcMAF expert and scientist – was investigated by the MHRA for her involvement with Immuno Biotech but never prosecuted because she was so obviously innocent. In fact, Lynda Thyer is totally innocent of all charges in both France and England, but that did not prevent the French government from pressing groundless charges anyway.

OCLAESP and French Investigating Judge Jean-Luc Gadaud were clearly told by the MHRA to prosecute David Noakes and Lynda Thyer. We know that because in the European Arrest Warrant (EAW) issued by Judge Gedaud, the OCLAESP admit that they were first contacted by the MHRA about David and Lynda. Gadaud’s investigation should have uncovered that the company working in France was Duurzaam Gezond Producties BV of Holland and that neither David Noakes nor Lynda Thyer were having anything to do with France, except that Lynda had rented a vacation farmhouse near Cherbourg.

Yet, in a blatant judicial abuse, Judge Gadaud invented nine false charges against David Noakes out of his own imagination, and then copied them over to Lynda Thyer, word for word, even including David’s case number. Oops! Gadaud should serve five years in prison under the French penal code for this perjury. Neither Lynda nor David had anything to do with GcMAF in France.

Before being kidnapped in England and forcibly taken to France, Lynda appeared before three English judges, Judge Rebecca Crane, Judge Sir Michael Supperstone, and Judge Michael Cox, in a futile attempt at justice. Instead, these Judges did as they were probably told to do and they ordered Lynda to be extradited under the illegal EAW, even though they had to have known that she was innocent.

In August 2019, the innocent Lynda Thyer, even though very ill, was extradited and sent to a French prison in the Paris area. This prison, Fleury-Mérogis, is the largest one in Europe, having been built for 2,855 prisoners but holding over 4,100. French prisons are among the worst in the European Union.

Keep in mind that Lynda is being held pending an investigation. She has not been convicted of anything at all! The French system allows for the accused to rot in prison while the Judges take their leisurely time constructing a case to prosecute the accused. Often this can take years. Meanwhile, many innocent souls languish in prison. That is the real crime against humanity.

Lynda Thyer has been in French women’s prison now for four months; she’s on hunger strike, and has lost considerable weight. You can hear the other prisoners cry out at their mistreatment, real cries of anguish and tears, and Lynda’s situation is no different. Thanks to donors, the NHF obtained the expert legal counsel for Lynda that won this victory for her today, and we hope to get her out of prison on December 8th. NHF has also obtained French legal counsel for David in his own extradition matter. And remember that Lynda still must stand for trial.

This is an abuse of the European Arrest Warrant system, and an abuse of English and French law. Above all, it is an incredible injustice to a woman who hurt no one and only did good things for those who had zero hope as they neared death.

For decades, the NHF has been about helping those practitioners and others who are being persecuted by mindless authorities who dance only to the tune of their corporate masters. Such is the case here. Both David and Lynda were helping people who had been given a death sentence of cancer. Substantial research plus wide clinical experience shows that GcMAF can eliminate most cancers, and at a fraction of the cost of orthodox therapies.

This Thanksgiving weekend can we count on you to help us with a donation so that we can continue to pay for the legal team that won this great victory today?

I need to hear from you today please. Then, I ask that you to please forward this email and share it with five others – loved ones and friends you personally want to see protected and to have effective cancer treatments available in case they are needed.

Thank you for caring and for trusting us to help protect you and your family. We count on your support so that we may keep fighting and winning against lap-dog “regulators” and their corporate masters. God only knows that we need all of the help we can get in these battles. Thank you so very much.

P.S.  The NHF is the oldest & best-respected Health Freedom group fighting for your health-freedom choices, access to dietary supplements, nutritional foods, and for the preservation of your health rights. With your help, we can expand to help preserve Health Freedom in America, Canada, Europe, and around the Globe.