Prepare the Funeral Dirge for Monsanto/Bayer 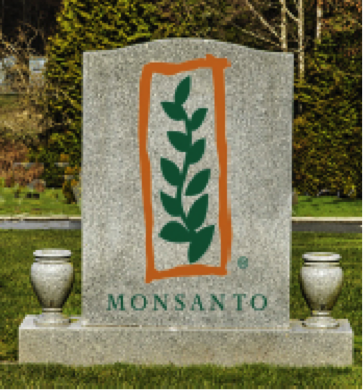 Monsanto developed glyphosate in the 1970s, and this weed killer is now sold in 160-plus countries. The herbicide came under severe scrutiny in 2015, though, after the French-based International Agency for Research on Cancer (part of the World Health Organization) classified it as a “probable human carcinogen.” Lawsuits against Monsanto ensued, but the U.S. EPA still stubbornly says that glyphosate is safe for people when used in accordance with label directions.

During the trial, Edwin Hardeman, a 70-year-old Santa Rosa man, testified that he had sprayed Roundup® (the commercial herbicide containing glyphosate) for nearly three decades to control weeds, poison oak, and overgrowth on his Sonoma County property starting in the 1980s. During its use, he got the herbicide on his skin. In 2015, he was diagnosed with non-Hodgkin’s lymphoma.

Hardeman’s case is considered a “bellwether” trial for hundreds of other plaintiffs in the U.S. with similar claims, which means the verdict could affect future litigation and other cancer patients and families. Monsanto, now owned by the German pharmaceutical company Bayer, faces more than 9,000 (see 13,400 lawsuits at end) similar lawsuits across the U.S.

U.S. Judge Vince Chhabria presides over hundreds of Roundup lawsuits and has deemed Hardeman’s case and two others “bellwether trials.” The judge had bifurcated Hardeman’s trial into two phases. Hardeman’s attorneys had to first convince jurors that using Roundup was a significant factor in his cancer before they could make arguments for damages.

The outcome determines whether lawyers will keep fighting or will move to settle the cases. Legal experts said a jury verdict in favor of Hardeman and the other test plaintiffs would give their attorneys a strong bargaining position in any settlement talks for the remaining cases before Chhabria. This trial moves on to the second phase to determine whether the company is liable and if so, for how much.

Jennifer Moore, one of Plaintiff’s lead attorneys said: “This has been a long time coming for Mr. Hardeman. He’s very pleased he had his day in court, and we’re looking forward to Phase 2.”

Many government regulators have rejected links between cancer and glyphosate. Monsanto has vehemently denied such a connection, saying hundreds of studies have established that the chemical is safe. Bayer, who acquired Monsanto last year, said in a statement after the verdict that it continues to “believe firmly that the science confirms glyphosate-based herbicides do not cause cancer.” It added, “We are confident the evidence in phase two will show that Monsanto’s conduct has been appropriate and the company should not be liable for Mr. Hardeman’s cancer.”

The jury reached the verdict on its fifth day of deliberation. Hardeman’s lawsuit is the first to go to trial of more than 760 lawsuits that were filed against Monsanto in Federal courts around the nation, all transferred to Chhabria’s court.

Tuesday’s unanimous verdict comes after the historic verdict in August 2018, in which a California jury in State court ruled that Roundup caused the terminal cancer of Dewayne Johnson, a former school groundskeeper. That jury said Monsanto failed to warn Johnson of Roundup’s health hazards and “acted with malice or oppression,” awarding Johnson $289 million in damages, which was later reduced by that presiding judge. While Johnson’s attorneys argued that Monsanto had “bullied” scientists and fought to suppress negative studies about its product, this Federal judge barred Hardeman’s lawyers from discussing Monsanto’s alleged influence on research and regulations during the trial.

Chhabria went so far as to sanction Hardeman’s lawyer for bringing up Hardeman’s “personal history,” referring to internal Monsanto documents, and explaining the process behind various regulatory decisions about glyphosate in her opening remarks. With Hardeman’s trial limited to a strict discussion of whether Roundup exposure caused his cancer, his attorneys have argued they were facing a significant disadvantage.

Although the judge restricted the first part of the trial to a limited discussion of Hardeman’s cancer, he issued something of a rebuke of the company in one procedural order last week, saying: “There is strong evidence from which a jury could conclude that Monsanto does not particularly care whether its product is in fact giving people cancer, focusing instead on manipulating public opinion and undermining anyone who raises genuine and legitimate concerns about the issue.”

Environmental advocates celebrated the verdict. Ken Cook, the president of the Environmental Working Group, said the ruling supported previous conclusions that “glyphosate causes cancer in people. As similar lawsuits mount, the evidence will grow that Roundup is not safe, and that the company has tried to cover it up.”

Other environmental groups agreed. “It is also a resounding verdict against our pro-industry EPA regulators, who have failed miserably in their duty to protect us all from the known health risks of dangerous pesticides,” said Nathan Donley, a scientist at the Center for Biological Diversity.

Unlike DeWayne Johnson, whose doctors have described his illness as terminal, Hardeman’s cancer is in remission. In pretrial rulings, Chhabria described evidence linking Roundup to cancer as “shaky” but decided there was enough to bring the case to a jury. He rejected Monsanto’s motions for dismissal. Federal law, he said, “allows states to regulate or ban pesticides that have been federally approved.”

Chhabria had earlier granted the company’s request, however, to divide the trial into phases, requiring jurors to consider first whether Roundup was a likely cause of Hardeman’s illness without hearing evidence of Monsanto’s conduct in marketing the product, a central factor in determining the company’s liability for damages.

Lawyers for Hardeman and other plaintiffs contend the company hid evidence of the herbicide’s danger from its users and “ghost-wrote” some of the purported favorable research findings. Hardeman’s lawyers, Aimee Wagstaff and Jennifer Moore, said after the verdict, “Now we can focus on the evidence that Monsanto has not taken a responsible, objective approach to the safety of Roundup. Instead, it is clear from Monsanto’s actions that it does not particularly care whether its product is in fact giving people cancer, focusing instead on manipulating public opinion and undermining anyone who raises genuine and legitimate concerns about the issue.”

During the trial, Monsanto lawyers argued that there was no provable cause of Hardeman’s illness, but that the most likely factor was hepatitis C, from which he had suffered for nearly three decades.

His lawyers countered that Hardeman had been free of hepatitis since 2004, but an oncologist testifying for Monsanto said the illness had lasting effects on the genetic system, a “hit-and-run” impact as the witness put it that left its victims vulnerable to cancer.

The jury awarded Hardeman $80 million in the next phase of the trial. Lawyers for Monsanto/Bayer have asked Judge Chhabria (who is overseeing a batch of lawsuits accusing the company’s blockbuster herbicide Roundup of causing cancer) to reverse the $80-million-damages verdict in the first bellwether trial of the multidistrict litigation or to grant a new trial.

In early May 2019, a Superior Court jury in Oakland unanimously awarded $2+ billion to the Pilliods, a husband and wife suffering from non-Hodgkin’s Lymphoma. Their lawsuit maintained that Roundup-glyphosate weed killer caused their cancer; this becomes the largest single U.S. jury verdict to date against the company in litigation over the chemical. The jury found Roundup was defectively designed, that the company failed to warn of the herbicide’s cancer risk, and that the company acted negligently.

The German chemicals giant now faces more than 13,400 U.S. lawsuits over the herbicide’s alleged cancer risk. Bayer in a statement said it was disappointed with the verdict and will appeal, adding that both Alva and Alberta Pilliod had long histories of illnesses known to be substantial risk factors for non-Hodgkin’s lymphoma.

After the Bay Area jury verdicts, Vietnam banned Roundup. The toxic level of herbicides containing glyphosate had been of concern in that country for a long time.

As if Vietnam had no experience and knew nothing of US neurotoxic chemicals like Agent Orange, U.S. Secretary of Agriculture Sonny Perdue criticized Vietnam’s move to ban Roundup, saying the decision would have “devastating impacts on global agricultural production,” and that the U.S. government had shared scientific studies with Vietnam concluding that glyphosate is unlikely to pose a carcinogenic hazard.

“As I’ve often said,” Secretary Perdue continued, “if we’re going to feed 10 billion people by 2050, farmers worldwide need all the tools and technologies at our disposal. In addition to the immediate effect of slowing the development of Vietnamese agricultural production, there’s the risk that Vietnam’s farmers will turn to unregulated, illegal chemical products in place of glyphosate. Vietnam needs to look at the potential ramifications for its own farmers. On numerous occasions, USDA has shared scientific studies with MARD from the U.S. Environmental Protection Agency and other internationally recognized regulatory bodies concluding that glyphosate is unlikely to pose a carcinogenic hazard to humans. This ban flies on the face of that scientific evidence.”

Whatever scientific evidence Secretary Perdue is citing, it is certainly not all of the science that was considered by the Monsanto juries, which found Monsanto/Bayer liable to the tune of billions of dollars. It is a sad day indeed when government officials appear to be nothing more than corporate shills instead of representing their own citizens.