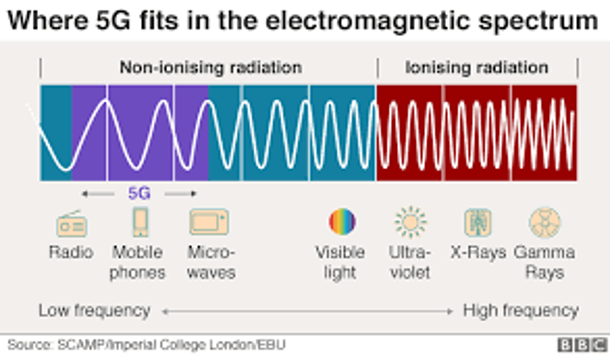 Radiation: A Worldwide Health Crisis in the Making

Electromagnetic radiation is everywhere. We can’t hear it, feel it or smell it, but it’s there and has the potential to cause many serious illnesses. It emanates from our cell phones, our microwave ovens and many of our electric devices. It has been with us from the beginning of time because our sun generates radiation. These waves give our planet life but also can cause serious damage. The same is true with manmade radiation, which provides many benefits while also endangering us. Here is just some of the mounting evidence of the dangers of electromagnetic radiation:

Why are these examples of radiation risk factors not more widely known or better documented?

There are several answers to this question. Here are a few of the most common ones:

The five stages of cellular deterioration

Cells don’t go from being healthy to unhealthy overnight. In fact, it can take many years for a disease to develop.  When cells become challenged, the body continues to try to repair and replace these cells using many different response strategies. Unfortunately, conventional medicine has not done a very good job of identifying early cellular changes. Instead they tend to wait until cells become extremely dysfunctional to the point of showing serious symptoms such as high blood pressure, high cholesterol, difficulty breathing or heart palpitations.

To make matters worse most conventional doctors are not well trained on the impact of radiation exposure and often do not include this risk factor in their diagnoses. This is probably why there are so many incorrect or incomplete diagnoses for conditions such as fibromyalgia, autism, Lyme disease and Epstein-Barr virus. Radiation can often be the missing factor in many of these more challenging illnesses. Functional Medicine has done a much better job at both the early diagnosis and treatment of chronic illness. Their raison d’etre is finding the root cause of a health problem as soon as possible and then treating it with the best evidence-based medicine. Understanding the five stages of cellular deterioration can provide a good explanation of why this is so important. 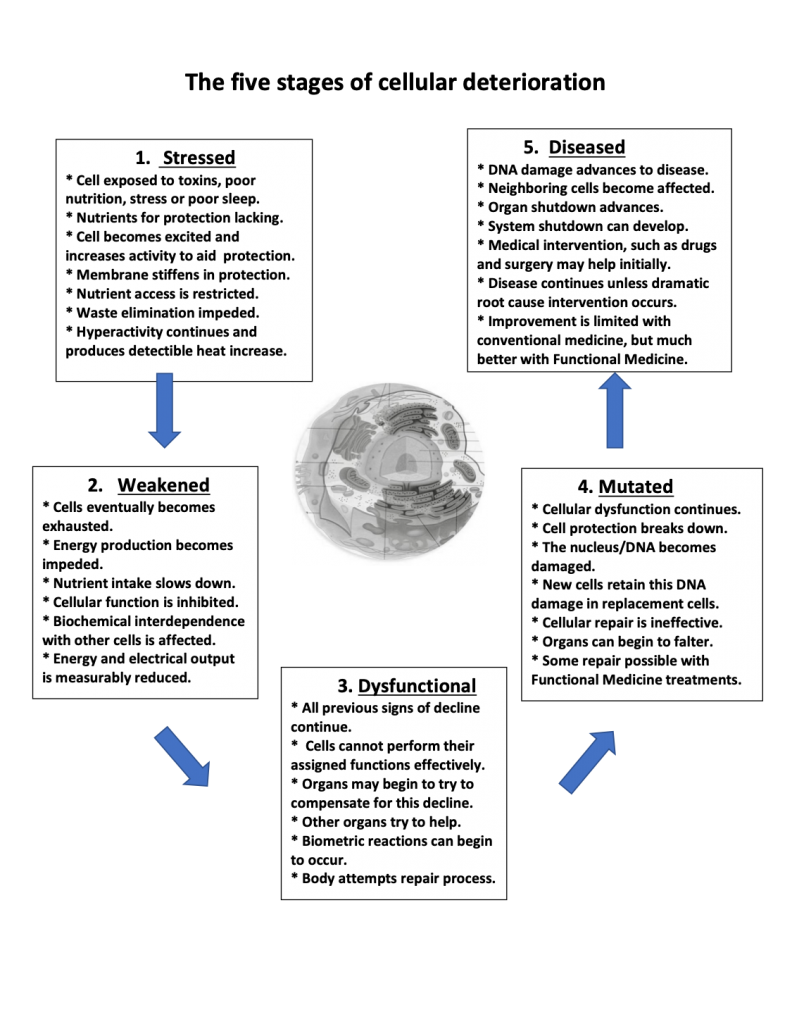 As we can see from the preceding chart, cells become stressed when they are not nourished properly, exposed to toxins, emotional stress, poor sleep or excessive radiation. These stressed cells become excited and usually experience stiffness of their exterior membrane, which causes ever more nutritional deficiency and the inability to properly remove waste material from the cell. If cells are exposed to these assaults too often they can become weakened, which starts to impact their function. Finally, when cells are weakened for too long (five to ten years) they become dysfunctional as expressed by measurable indicators such as high blood pressure, high blood sugar, high cholesterol or any number of symptoms such as cramps, headaches, mood changes, hot flashes, fatigue, etc.

Conventional allopathic medicine has traditionally opted to treat the symptoms of illnesses only at the dysfunctional state or after cells have already reached the mutated and diseased stages. Functional medicine, on the other hand, looks for the root cause of the health challenge and tries to treat the whole body with evidence-based natural approaches.  Practitioners also utilize evidence-based allopathic remedies if they have been shown to be effective. Unfortunately, allopathic medicine does not have good evidence for 75 to 80 percent of what they do, while functional medicine usually does have the necessary scientific evidence.

Functional medicine has found effective treatments for cancer and Alzheimer’s disease, which conventional medicine has been slow to embrace. Excellent natural protocols have been found that treat and even reverse these and many other chronic illnesses. These treatment plans all have certain things in common. Since the illnesses are typically caused by many factors, they are most successfully treated by protocols with multiple elements. This has been one of the serious weaknesses of conventional medicine, which usually tries to find one cause and then apply a single solution. The human body is complex with many disease pathways and immune defense mechanisms. Most disease is unlikely to have a single cause or a single antidote.

It’s this challenge of multiple causes that brings us back to radiation because, while we know there are many impacts of radiation on the body, it’s difficult to determine when radiation alone is the cause of an illness. Toxins, stress, poor food and radiation can all lead to the development of free radicals in the body, which is a missing or unpaired electron in a molecule. This free radical steals electrons from healthy cells. This theft is the start of most disease processes and leads to the stressed and weakened cell deterioration stage we spoke of earlier. Then at the mutation stage of cellular deterioration, the DNA in the nucleus of the cell becomes damaged. We now have two things in common in the advancement of chronic illness, the creation of free radicals and DNA damage in the nucleus of the cell. Unfortunately, as was stated earlier, we do not usually know which toxin, food, stress incident or radiation exposure caused the free radicals or the DNA damage. Some things we do know about the direct causes of some diseases:

Enough evidence to determine the direct cause and effect of disease relationships has been found to produce large financial settlements in lawsuits. However, there is still not enough evidence to determine the influence of cell phones, Wi-Fi or 5G radiation on specific illnesses. Some scientists, like Dietrich Klinghardt and George Carlo, are starting to accumulate this evidence. Much additional research is urgently needed. In the meantime, the average person needs to educate themself on the topic of radiation and utilize the proven prevention and remediation strategies that are available to control their radiation risk.

There are many different kinds of radiation and exposure opportunities for this toxin that we can’t see, smell, hear or touch. These risks are further complicated by the radiation industry, which provides much misinformation regarding the risks of electro-magnetic radiation. How is a naive and trusting public expected to cope with risks that may only become obvious when it’s too late to prevent or correct serious health problems? In these circumstances it’s every individual’s responsibility to exercise caution and demand accountability from governments and the corporations providing products and services related to radiation.

What Are the Different Sources of Radiation?

What Are the Different Types of Radiation Exposure?

There are two types of radiation, nonionizing and ionizing:

How to Determine Relative Risk from Radiation

Is There One Form of Radiation That’s More Dangerous?

Over exposure to any form of electro-magnetic radiation is a potential danger. The most dangerous form of radiation appears to be the type associated with communication and the sharing of information. These waves with information on them are new to our bodies and are not recognized as normal or acceptable. Dr. George Carlo is a world-recognized expert on cell phones, and he describes the problem this way:

This damage accumulates, along with damage from other toxins, such as pesticides, smoking, excess alcohol consumption, stress and heavy metals.  This eventually leads to cancer of some kind, or other chronic illnesses, depending on personal genetic predispositions and health behaviors. This is why it is often so difficult to identify the specific source of an illness. There are so many possibilities.

The problem with identifying radiation as the cause of a disease such as cancer for example, is that free radicals come from many sources.

Finding the root cause is often impossible and radiation is one of the most difficult toxins to track accurately. So how do we know that radiation is potentially unhealthy?

Some Examples of Radiation’s Proven Risks

Case study #1 – The town of Gotene, Sweden introduced a super Wi-Fi system in the summer of 2006. The residents had no prior knowledge of this change and were quickly overcome by headaches, difficulty breathing and blurred vision. As soon as the system was powered down, the symptoms stopped.

Case study #2 – In 2004, there was a study of people living or working near a cell phone tower (400 meters or less). The documented impact included fatigue, irritability, headaches, nausea, loss of appetite, sleeping disorders, depression, skin disorders and cardiovascular problems. (Oberfeld 2004)

Case study #3 – A study was published in 2011 in the Journal of Fertility and Sterility that found exposure to Wi-Fi laptops damaged DNA and the reproductive system in less than four hours.

Case study #4 – Cell phones can compromise the Blood-Brain Barrier in the brain, which is designed to protect our brain from toxic damage. This study (Salford 2012) found that a single 2-hour exposure caused damage, and after 50 days, neural damage was evident. The levels needed to produce this damage were as low as 0.001 W/Kg, or less than holding a cell phone at arms length.

Which Parts of the Body are Most Vulnerable?

What Actions Can Be Taken to Mitigate/Reduce Radiation Risk?

What Are the Tests for Early Exposure Damage?

Use blood or urine tests, such as:

The current renewed interest about the impact of radiation on our health is primarily due to the introduction of the 5G technology for wireless electronic communication. The older 3G system used 2.4 Ghz (gigahertz) of power while the new 5G system will use up to 90Ghz. The impact on wireless transmission can be illustrated by the following example:

You can imagine the amount of increased power needed to achieve this kind of result. There are other similar benefits such as the use of streaming video or the operation of driverless vehicles. The antennas for the vehicles will be placed every 500 yards. This increased capability for the transmission of electronic signals will be very beneficial for businesses, governments and certainly consumers. However, this new 5G technology has not been adequately tested by the developer or by government regulators, which means that we have no idea what the costs will be compared to the benefits.

There are now over 10,000 peer reviewed scientific studies by independent researchers showing a variety of harmful biological impacts from wireless radiation transmissions. In these studies, it has been clearly shown that children are the most vulnerable because their cells are still developing. The potential health impacts are further complicated by the fact that the effects of wireless radiation, of all kinds, are accumulative. There are no standardized tests to determine how much someone has absorbed, and all too often the first signs that something harmful has happened is a medical challenge that is in an advanced state, such as cancer. The following two lists may be helpful in this regard; one is a list of symptoms of concern.

These symptoms are still emerging and are not well understood or documented. A recent study has begun to provide some additional perspective on this matter. The study conducted by the National Toxicology Program of the US National Institute of Environmental Health Services found that radiation emitted from cell phones may be linked to an increased risk of cancer. This study was conducted using 2G or 3G technology. Since 5G is over twenty times stronger it is more than likely that future studies will provide even more certainty regarding the risk of this radiation exposure.

Until the radiation industry and appropriate government agencies take action to measure the health risk of radiation exposure, it is every person’s responsibility to do their own due diligence and take whatever action they can to protect themselves and their communities. Hopefully this article has provided some help in this regard.