Roll Up Your Sleeves For Your Shots

If you could read my lips, they don’t follow the above title. My headline has to pass censorship now that various online news sources say they are burying anti-vaccine posts under pressure from Congress.[1] Facebook and Pinterest have reportedly blocked searches for vaccination to “stop the spread of misinformation.” Write anything against vaccines and you will be branded as a wacko who is endangering the lives of virtually everybody.

Yet a careful examination of current vaccine propaganda does not support the idea that widely reported outbreaks of measles correlate with any anti-vaccine programs or even the spread of measles solely by unvaccinated individuals.

Data from the Centers for Disease control reveals cases of measles could just as easily be from incomplete vaccination (no booster shots), what health authorities are calling “vaccine hesitancy,” meaning when people delay second vaccination.

A single dose of the measles vaccine is 93% effective against measles and a second dose increases immunity to 97%.[2] In other words, of the 52,377,192 vaccinated school children in one large published study, an estimated 1,571,315 would not have developed sufficient antibodies to prevent measles.

A report in the Washington Post states the recent “outbreak” of measles in Washington State is the worst measles outbreak in more than two decades and has sickened nearly 70 people.[3] The CDC says measles has sickened 159 people in the U.S. since the start of the year. A 91.4% vaccination rate for measles among kindergartners in 2004-2005 is reported to have slipped to 76.5% by 2017-2018 in Washington State. That same report said: “If there’s an anti-vaxxer in your life who needs an attitude change, send them a link to a rash-covered baby…”[4] But are anti-vaxxers solely to blame?

Stomping out geographical pockets of unvaccinated

In an effort to stomp out pockets of unvaccinated individuals across the U.S. a team of researchers identified geographical “hot spots” where non-medical exemptions (NMEs) are prevalent.[5] A lot of these hotspots appear to be remote areas where indigenous people live outside of convenient access to major vaccination programs. Some of these measles “hot spots” are where immigrants (Somalis) or religious groups (Amish, Orthodox Jews) oppose vaccination. They don’t appear to be located where anti-vaccine groups are said to be active. 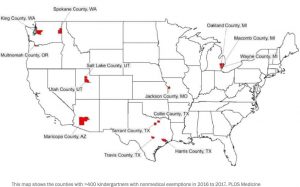 Non-medical exemptions for vaccination by kindergartners

An interactive U.S. measles map posted at The Huffington Post online displays the geographical movement of measles outbreaks through the years 2009 to 2015.[6] It generally shows more northern latitude outbreaks and certainly does not coordinate with any anti-vaccine programs across the United States. Yet news headline after news headline blames anti-vaxxers for all of these so-called outbreaks. 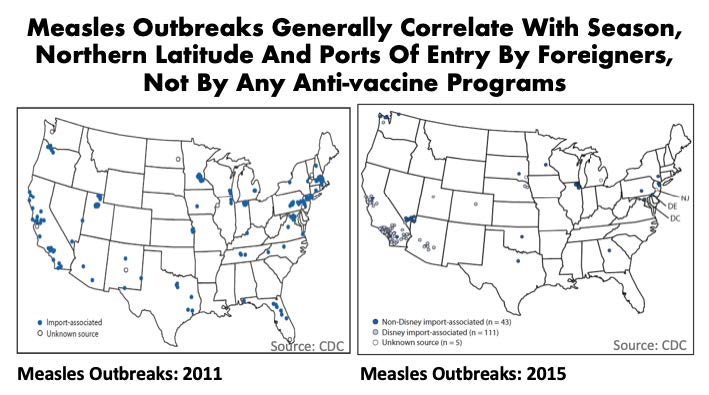 The Centers for Disease Control defines a measles “outbreak” as 3 or more cases. Five of six geographical hot spots for measles in 2019 are in Northern climates where vitamin D blood levels are typically low in winter.[7]

The reported 149 cases of measles in the first two months of the year 2019 (~75/month) would amount to ~900 cases by the end of the year, which would be more than recorded in recent years, but it has been a severe winter that has driven many people indoors which results in low blood levels of sunshine vitamin D and elevated measles virus blood levels.[8]

Imagine, the Governor of Washington State declared a state of emergency over this contrived measles outbreak that was blamed on anti-vaxxers. It has just been a harsh winter, that is all. The Governor of Washington should have been calling for emergency distribution of sun lamps and provision of vitamin-D pills to quell the measles outbreak since most children and adults are already vaccinated against measles.

Vaccination exemptions for kindergartners are reported to have increased by 19% nationwide between 2009-2013.[10] However, that is a relative number. Total non-medical exemptions (NMEs) amounted to 1.6% of the total kindergarten population in 2009-2010 and just 1.9% in the 2012-2013 school year. That is not 19 more cases out of 100 but a difference of less than 1 out of 100. That is how they come up with the relative +19% jump in NMEs. There has been no statistically significant jump in NMEs over the period 2009-13. The Washington Post reporter over-stated the numbers.3

For the period 2001-2011, 40% of reported measles cases occurred among U.S. residents returning from international travel or among foreign visitors.[11]

The 2014 measles outbreak linked to exposure and transmission among visitors to Disneyland in California[12] was more likely from foreign tourists who comprise 18-22% of total attendance at this theme park.[13] But the pro-vaccine news media and public health authorities were quick to blame the Disneyland measles outbreak on a foreigner or visitor who recently traveled abroad who then spread measles to unvaccinated visitors. The outbreak was inappropriately blamed on the anti-immunization movement in California.[14]

Measles outbreaks in the U.S. are better explained by geographical (northern latitude), season (winter) and concomitant lack of solar radiation exposure, and by transmission from visiting foreigners or Americans citizens returning from overseas travel than by any anti-vaccine campaigns, which frankly appear to be imaginary.

A hidden fact is that a significant percentage of children who develop measles are under the age of 1. Here is a revealing chart from one study[15]: 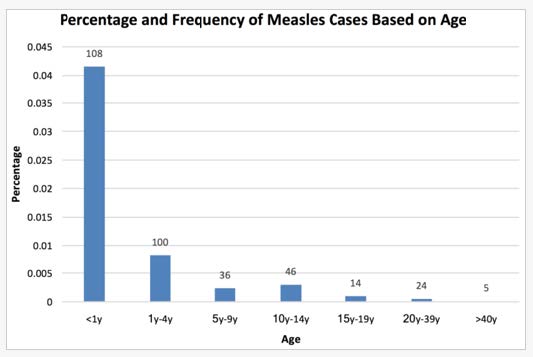 Lingering between the first measles shot and the second booster shot is not something that would be expected to be remedied given the age of the infants. About 85% of infants given a measles vaccine at the age of 9 months will develop immunity; 95% by age 1.[16] A 92% vaccination rate is said to be needed to prevent the disease.

Blame infants under age 1 for measles outbreaks as they comprise 94 percent of the unvaccinated children in Europe who got measles.[17] This may be something that cannot be fixed.

Imagine your young child is hospitalized and the doctor says your kid has developed four different infectious diseases all at one time. You would likely be shocked.

Vaccines combine infectious agents in order to limit the number of shots. There are bivalent-2, trivalent-3, quadravalent-4 and hexavalent-6 vaccines). For example, the trivalent MMR vaccinates against measles, mumps and Rubella. It seems almost cruel to inject up to six infectious diseases into young children at one time.

A young child in America is scheduled to receive 23 different vaccines before 15 months of age![18] It is commonly said that children do not have a sufficiently developed blood-brain barrier till age 2. However, the blood-brain barrier appears to be stable from an early stage of development.[19] But toxic heavy metals like those used in vaccines (mercury, aluminum) can breach this barrier.[20] These pathogenic microbes and the heavy metals that accompany them (mercury, aluminum) can enter the brain.

It is odd that even the smallest amount of lead is considered to be toxic to children’s brains[21] and impairs their IQ and alters their behavior.[22] Yet mercury is even more neurotoxic than lead, which is often insoluble. Mercury (thimerosal) is intentionally injected into young children via vaccine needles. With an unexplained epidemic of autism, one would think health authorities would err on the side of caution. Better than 4 in 10 American children are now chronically ill.[23] Why?

If modern medicine were truly interested in children’s health, they would mandate good nutrition for all children undergoing vaccination in order to ensure immunity. But they need the fear of infection and death to frighten parents to get their kids vaccinated. A few well-publicized vaccine deaths every year would serve as a successful scare tactic to promote vaccination.

While an Associated Press report states “1 or 2 of every 1,000 children who get measles dies (Centers for Disease Control & Prevention),”[24] fatality rates due to measles are “next to zero,” says VAXOPEDIA. The last recorded death due to measles was in 2015.[25]

And why doesn’t modern medicine promote zinc and vitamin-D supplementation prior to vaccination? Because it would soon become apparent kids who are well nourished don’t need vaccines. They would readily develop antibodies upon natural exposure to bacteria and viruses.

Dietary supplementation for young children is often belittled by modern medicine.[26] Vitamin pills are often considered to be quackery. The sellers of vitamin supplements are branded as pill peddlers.[27]

The monopoly over antigens and antibodies

Horrors! Young unvaccinated children in the State of Washington have naturally developed antibodies following person-to-person exposure to the measles virus rather than by means of vaccination.

In many parts of the U.S. it is unlawful for any child to develop antibodies due to natural exposure to disease-causing bacteria or viruses. Any outbreak of natural immunity outrages the medical community that holds a monopoly over antigens (killed or weakened bacteria or viruses) packaged in injectable vaccines to intentionally provoke a prolonged antibody response to incoming pathogens.

The U.S. is now witnessing how the medical industry condemns and demeans any effort by parents for their children to produce antibodies naturally, outside of vaccines.

Modern medicine is over reliant on vaccines to produce antibodies against infectious disease. Shamefully, there is currently no approved treatment for those children who do develop a full-blown case of measles, unless parents want to consider vitamin-D and zinc therapy. A responsive immune system requires nutrients such as vitamins A, D, and the trace minerals zinc and selenium.

An 81-page peer-reviewed report at BeyondVaccines.com by this author documents that zinc supplementation prior to inoculation would likely improve the effectiveness of vaccines and reduce fever and other side effects. When measles does occur, these nutrients are therapeutic as well as preventive.

Anti-vaxxers: take a look in the mirror

We must remember as we look in the mirror, that we who oppose vaccination are considered nothing short of murderers, “hubristic idiots” says a published report.[29]

Chatting up vaccination: association or cause?

Two university-based researchers did track online anti-vaccination search terms and correlated them with falling rates of immunization.[30] Why, anti-vaxxers even made the World Health Organization’s top-ten global health threats of 2019 say news reports.[31] Well not quite. WHO calls it “vaccine hesitancy”[32] and said nothing about anti-vaxxers. But it sounds good, so pro-vaxxers run with it.

Those who embrace the science of vaccination should know the difference between association and cause. There may be an association between measles outbreaks and online discussion about vaccines, but in reality, the weather and low vitamin-D levels appear to be more causal than online blogs.

Let’s not forget there apparently was an ineffective batch of MMR vaccine that was responsible for an outbreak of measles in England in 2012-2013.[33] Measles occurred among the vaccinated.

Lawrence Solomon, a leading vaccine expert emphatically says “people’s failure to get vaccinated is deplorable…. but the more fundamental problem stems from the vaccine being less effective in real life than predicted, with too-high failure rate – between 2% and 10% don’t develop expected antibodies after receiving the recommended two shots… the vaccine is simply a dud in many…” Furthermore, “even when the vaccine takes, the protection quickly wanes… 9% of children having two doses of the vaccine…will have lost their immunity after just seven and a half years.”[34]

Anti-vaxxers had better hope for better weather so they don’t get blamed for the next measles outbreak. There is better data linking low vitamin-D levels due to inclement weather to low vaccination rates and just how do you get the kids to show up for booster shots when the snow banks are 5-feet high?

While Congress beats the drum for the vaccine industry, faulting imaginary anti-vaccine groups for an outbreak of measles said to be the largest outbreak in recent years, this so-called outbreak has nothing to do with anti-vaccine campaigns.

[4] Herzog K, “Thanks to anti-vaxxers, there’s another measles outbreak in Washington State,” The Stranger, Jan 23, 2019.

[5] Olive JK, et al., “The state of the antivaccine movement in the United States: a focused examination of nonmedical exemptions in states and counties,” PLoS Medicine, June 12, 2018.

[11] Documentation and verification of measles, Rubella and Congenital Rubella syndrome elimination in the region of the Americas, United States National Report, March 28, 2012. Centers for Disease Control.

[26] Nogueira F, “To be more skeptical about anti-vaccination and vitamin supplements: an interview with Paul Offit,” CSI.com (Committee For Skeptical Inquiry) Vol. 26.4, Winter 2016/2017.