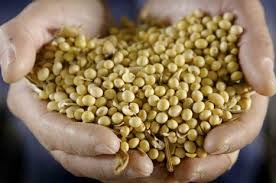 DES MOINES, Ia. – Bouncing down a dirt road a couple of summers ago, past a gentle patchwork of barnyards and soybean fields in central Iowa, farmer Kent Friedrichsen strained over the steering wheel of his van and stared through the windshield in dismay. His soybean fields, where he’d used seeds developed by Monsanto Co. and sprayed with its popular glyphosate weed killer Roundup Ready, were littered with yellowed leaves and dead plants. Four days earlier, the plants had been waist high and emerald green. Nearby, in fields where he had planted seeds that weren’t genetically engineered and didn’t use glyphosates, the soybean plants were still healthy and lush. Farmers call this “sudden death syndrome,” a plant disease that has plagued the country’s heartland and the nation’s estimated $36.8-billion soybean industry. Scientists, who first spotted the disease in Arkansas in 1971 — more than 20 years before Monsanto introduced its Roundup Ready soybeans in the U.S. — blame damp weather and a fungus that rots the plant roots. But, Friedrichsen said, “for years, I’ve wondered whether there wasn’t something else.” Now, despite mountains of research to the contrary, one soil scientist is roiling the agricultural world with claims that there might be some truth to the farmer’s unease. Don M. Huber, an emeritus professor at Purdue University who has done research for Monsanto on chemical herbicides, alleges that he has found a link between genetically modified crops and crop diseases and infertility in livestock: an “unknown organism” he and other researchers claim to have discovered last summer in Midwestern fields like Friedrichsen’s. “This organism appears NEW to science!” Huber wrote in a letter in January to Agriculture Secretary Tom Vilsack about the matter. He added, “I believe the threat we are facing from this pathogen is unique and of a high-risk status. In layman’s terms, it should be treated as an emergency.” Huber, 76, asked in the letter for the U.S. Department of Agriculture to investigate. –LA Times