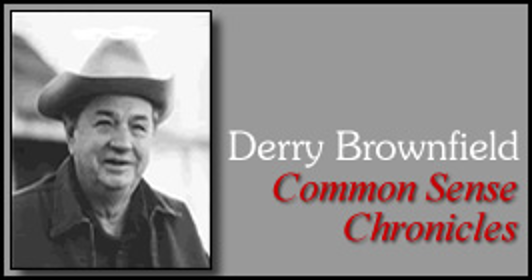 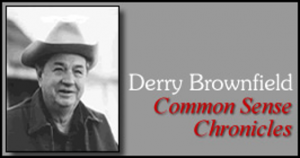 Just before Christmas I received a beautiful book from C.J. Hadley titled, “THE RED MEAT SURVIVORS—A century of cowboy memories.” It’s a collection of stories of those who are enjoying long lives in the American West. These people settled the Western United States and are still living in their 80’s and 90’s, several have passed the century mark. They all ate more than their share of beef. These old time ranchers admit they ignored the problems of cholesterol and they believe that red meat is good and they have proven it by their long, active lives. I recently celebrated my 79th birthday and still consume vast amounts of beef and pork. At “Bury Derry Day,”I doubt that the cause of death will be “lack of cholesterol.”

I’m sure the red meat survivors in C.J.’s book didn’t buy their meat at Wal-Mart or Kroger or Albertsons. The beef these folks consumed was born, raised, butchered and processed locally. Today the beef we eat is a totally different product than it was just a few decades ago. The old-fashioned method of handling beef was to slaughter the animal, wrap it in a shroud and hang it in a cooler for a week or longer. This allowed the meat to age and take on a totally different flavor than it had the day of slaughter. The carcass was then transported in a refrigerated car and delivered to a butcher that cut it into steaks and roasts and ground the trim into hamburger.

Today, the giant beef packers slaughter, cut the beef into primal cuts, put the product in boxes, load them on trucks and quickly the meat is on the way to retail outlets all across the land. If a high-dollar restaurant wants to offer its customers a prime rib or truly fine dining, they must age the meat themselves. The typical consumer never gets to taste the quality of beef that once adorned our American kitchens.

To add insult to injury, or to add profits to the packers, the industry is now putting what was once dog food into people food. It’s a new process called “ADVANCED MEAT RECLAMATION.” It all began when Eldon Roth invented a process to remove every ounce of meat from the bone. He took his idea to the CEO of IBP, Robert Peterson. In 1980 IBP was the nation’s largest beef processor and Eldon Roth approached Peterson with the hopes of selling him his newly invented equipment. Peterson was not interested in buying Roth’s equipment, but wanted to sell Roth his bones. It’s easy to remove the meat from the long bones, but a fair amount of meat exists in the backbones, which is nearly impossible to extract. The back bones also contain the spinal cord and, up until Mr. Roth came along, the vertebrae were processed into dog food.

Mr. Roth had a better idea. He founded a company called BEEF PRODUCTS. His new company began mixing the entire vertebrae, spinal cord and all, along with what the industry calls 50-50 (trimmings and fats), grinding it into a mixture of pink froth, adding ten percent anhydrous ammonia to kill pathogens such as E-coli and salmonella and selling it to Cargil, McDonald’s Corp, Burger King, the school lunch program and anyone wanting to cheapen the cost of hamburger. The use of this product lessens the cost of a pound of ground beef by about three cents.

One major problem existed—the concoction smelled like ammonia. The FDA (Food and Drug Administration) had given Roth permission to add 10% percent ammonia, but without letting anyone know, the ammonia mixture was cut to the point that it wasn’t strong enough to control the pathogens. Large recalls of ground beef took place and the USDA determined that “at least some of the product was no longer receiving the full lethality treatment.” The FDA had okayed the use of ammonia saying, without labeling, it was safe when used as a processing agent.

The Medical Dictionary describes ammonia poisoning that may occur from swallowing or breathing ammonia, which is found in household cleaners, liniments and fertilizers. The Medical Dictionary didn’t mention ground beef. Symptoms of ammonia poisoning include fever, cough, severe chest pain, temporary blindness, lip swelling, stomach pain and vomiting. “Damage is related to the amount and strength of the ammonia.” Our government (FDA) tells us to go ahead and consume this ammonia treated pink slime, but a “little dab will do you.”

Several USDA microbiologists have raised warning flags concerning the approval of the treated beef for sale without obtaining validation of the safety risk. Gerald Zirnstein, one of those microbiologists, called the processed beef “pink slime” and said, “I do not consider the stuff to be ground beef, and I consider allowing it in ground beef to be a form of fraudulent labeling.” This mashlike substance is frozen into blocks and used in a majority of the hamburger sold nationwide. BEEF PRODUCTS reported its production is approximately seven million pounds a week and suppliers of national restaurant chains, as well as the government’s school lunch program, use the product.

McDonald’s has been using this reclaimed beef since 2004, which like Wal-Mart’s ground beef, can contain up to 20 percent “advanced meat reclamation.” During the last school year the school lunch program used 3.5 million pounds.

I do consider myself a RED MEAT SURVIVOR–NOT A PINK SLIME SURVIVOR, therefore, in order to continue surviving on red meat, I no longer plan to eat any ground beef that does not come from someone I know.

Derry Brownfield was born in 1932 and grew up during the depression. He is a farmer and a broadcaster. Derry attended the College of Agriculture at the University of Missouri where he received his B.S. and M.S. degrees. He taught Vocational Agriculture several years before going to work as a Marketing Specialist with the Missouri Department of Agriculture. Derry served as Director of the Kansas City Livestock Market Foundation at the Kansas City Stockyard prior to establishing himself in farm broadcasting.

Derry started farming when he was 16 years old and received the Future Farmers of America State Farmer degree in 1949. Since that time the Brownfield Farm has grown to over 1000 acres maintaining a herd of 200 registered Charolias cows.

In 1972, Derry and his partner established the Brownfield Network which now serves 250 radio stations throughout the Midwest with news and market information. In 1994, Derry started his own syndicated radio talk show and he is one of the most popular radio talk show hosts in America. The Derry Brownfield Show can be heard on approximately 80 radio stations in 23 states. With his entertaining sense of humor and witty commentary he has captured audiences for over 30 years. His ability to present an informative talk show while being light and colorful is why he has a large loyal listening audience.

Derry Brownfield is a practical farmer, a practical business man and a very entertaining speaker. He travels extensively throughout the country speaking about his common-sense point of view.