What Is This Tiny Black Seed and What Is It Good For? 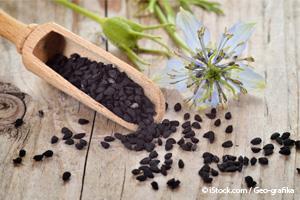 More than 650 peer-reviewed studies have looked into the potential health benefits of “black seed,” which come from the flowering plant Nigella Sativa. Revered since ancient times for its versatile medicinal qualities, black seed oil was found in Egyptian pharaoh Tutankhamun’s tomb.1

Black seed, which is also known as black cumin, black caraway, black sesame, onion seed and Roman coriander, has a long history of use in traditional systems of medicine, including Ayurveda and Siddha.

According to a review on black seed’s therapeutic potential published in the Asian Pacific Journal of Tropical Biomedicine:2

“The seeds of N. sativa have been widely used in the treatment of different diseases and ailments. In Islamic literature, it is considered as one of the greatest forms of healing medicine. It has been recommended for using on regular basis in Tibb-e-Nabawi (Prophetic Medicine).

It has been widely used as antihypertensive, liver tonics, diuretics, digestive, anti-diarrheal, appetite stimulant, analgesics, anti-bacterial and in skin disorders.”

Black cumin has a wide spectrum of pharmacological actions that have been supported by science. Among them:3

Black cumin has even been described as a “miracle herb,” and its name in old Latin, “Panacea,” means “cure all.”4

Traditionally, black cumin has been used for immune-system support, well-being, digestive health, respiratory issues, kidney and liver support, and heart health. In Asia and the Middle East, black cumin seeds have long been used to treat asthma, bronchitis, rheumatism and other inflammatory diseases.

A tincture of the seeds has traditionally been used to treat indigestion, loss of appetite, diarrhea, parasitic infections and skin problems. An external application of black cumin oil has even been used as an antiseptic and roasted seeds as a treatment to stop vomiting.5

The most abundant active plant chemical in black cumin is thymoquinone; other bioactive compounds in the seed include Î±-hederin, alkaloids, flavonoids, antioxidants and fatty acids. Some of the most compelling research into black cumin’s health benefits is highlighted below.

Thymoquinone is known to have anti-cancer effects.6 Research published in Drug Discovery Today concluded thymoquinone has a long history of battling cancer in vitro and in vivo (in “test tube” experiments and animal studies), and modulates 9 of the 10 hallmarks of cancer.7

Thymoquinone extract from black cumin appears to be effective against cancers in the blood, lung, kidney, liver, prostate, breast, cervix, colon and skin.8

Oxidative stress may decrease the efficiency of pancreatic Î² cells, which control the production and release of insulin. As such, oxidative stress is thought to play a role in the development of diabetes.

When people with diabetes consumed two grams of black cumin per day for three months, it led to reductions in fasting blood sugar and HbA1c and increased the functionality of pancreatic Î² cells, which suggests black cumin may be a “beneficial adjuvant therapy in type 2 diabetes.”10

Consumption of black cumin is associated with lowering of elevated heart rate and blood pressure. Thymoquinone in black cumin also may benefit endothelial dysfunction, which is involved in many cardiovascular disorders.

In those with age-related endothelial dysfunction, thymoquinone helps to recover endolethial function, in part by inhibiting oxidative stress and regulating the angiotensin system, which is involved in controlling blood pressure.11

Black cumin is associated with anti-obesity effects, including reductions in body weight and waist and hip circumference, with researchers noting:12

A number of studies have indicated black cumin may be helpful for asthmatics. In one study, thymoquinone was found to be instrumental by reducing two inflammatory mediators of asthma and other inflammatory processes.13

Another study confirmed the anti-asthmatic effect of black cumin extract, showing it acts as a bronchodilator.14

The thymoquinone in black cumin seeds was even found to be superior to the asthma drug fluticasone (a synthetic glucocorticoid).15

Some countries, such as China, value black cumin seeds for their purported anti-aging benefits, and they are rich in B vitamins and iron, deficiencies of which have been linked to memory problems, hearing trouble and even gray hair.

Some have even called it a “seed of blessing” because it provides protection against two of the leading causes of death in the U.S., cancer and heart disease.16 According to Critical Reviews in Food Science and Nutrition:17

“Recent pharmacological investigations suggested its [black cumin’s] potential role, especially for the amelioration of oxidative stress through free radical scavenging activity, the induction of apoptosis to cure various cancer lines, the reduction of blood glucose, and the prevention of complications from diabetes.

It regulates hematological and serological aspects and can be effective in dyslipidemia and respiratory disorders. Moreover, its immunopotentiating and immunomodulating role brings balance in the immune system. Evidence is available supporting the utilization of Nigella sativa and its bioactive components in a daily diet for health improvement.”

Black cumin oil is available in supplement form, but you can easily add the seeds to your regular meals. It’s popular in North Indian, Pakistani, and Iranian cuisines, with a warm, slightly bitter flavor that tastes something like a blend of thyme, oregano and nutmeg.

You can add the seeds to casseroles, stir fries, salad dressings (try them mixed with lemon, cilantro and tahini) and baked goods, sprinkle them on salads, or even add them to your coffee or tea. You can also make black cumin tea by pouring hot water over the seeds (about one tablespoon) and letting it steep for 10 minutes.18

Aside from their culinary uses, a mixture of black cumin, honey and garlic makes a powerful tonic for soothing coughs and boosting immunity, especially during cold and flu season or if you feel like you’re coming down with an infection.19 Black cumin oil can even be used topically to treat psoriasis and eczema or mixed with facial cream to moisturize and soothe your skin.

The benefits are so impressive that I add about half an ounce (one tablespoon or 11 grams) of black cumin seeds to my breakfast smoothie every morning, and you may want to do the same. The prophet Mohammed even described this humble black seed as a cure for every disease but death itself.20