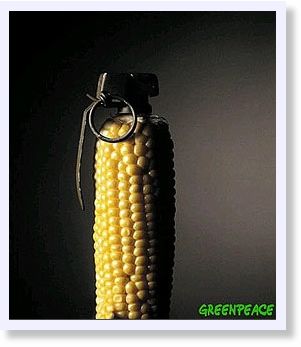 The farmer grinned as he told the visitor, “Watch this!” He called his pigs, which ran frantically towards him to be fed. But when he scooped out corn and threw it on the ground, the pigs sniffed it and then looked up at the farmer with confused expectation. The farmer then scooped corn from another bin and flung it near the pigs, which ran over and quickly devoured it.

The farmer said, “The first corn is genetically engineered. They won’t touch it.”It’s not just pigs that swear off genetically modified organisms (GMOs). In South Africa, Strilli Oppenheimer’s chickens won’t eat genetically modified (GM) corn. Most buffalo in Haryana, India, refuse cottonseed cakes if made from GM cotton plants. Geese migrating through Illinois only munched sections of the soybean field that was non-GMO. When given a choice, elk, deer, raccoons, and rats all avoided GMOs. And even during the coldest days of Iowa winter, squirrels, which regularly devour natural corn, refused to touch the GM variety.

One skeptical farmer who read about the squirrels wanted to see for himself if it was true. He bought a bag full of GM corn ears, and another of non-GM, and left them in his garage till winter. But by the time he fetched the bags, mice had done the experiment for him. They broke into the natural corn bag and finished it; the GM cobs were untouched.

No one knows why the animals refuse GMOs, but according to a 2009 statement by the American Academy of Environmental Medicine (AAEM), when lab animals do eat GM feed, it’s not pretty. “Several animal studies indicate serious health risks associated with GM food,” says the AAEM policy paper, which specifically cited infertility, immune problems, accelerated aging, insulin regulation, and changes in major organs and the gastrointestinal system, among the impacts of eating GMOs. “There is more than a casual association between GM foods and adverse health effects,” they wrote. “There is causation…”

Although we humans don’t have a natural sense to stay away from GM foods, AAEM’s position indicates that we should take a lesson from the animals. This renowned medical organization, which first recognized such dangers as food allergies, chemical sensitivity, and Gulf War Syndrome, called on all physicians to prescribe non-GMO diets to all patients.¹ They also called for a moratorium on GMOs, long-term independent studies, and labeling.

Former AAEM President Dr. Jennifer Armstrong says, “Physicians are probably seeing the effects in their patients, but need to know how to ask the right questions.” Renowned biologist Dr. Pushpa M. Bhargava and many others believe that GMOs may be a major contributor to the deteriorating health in America since GM foods were introduced in 1996.

GMOs on your plate

There are eight GM food crops: soy, corn, cotton, canola, sugar beets, Hawaiian papaya, and a little bit of zucchini and yellow squash. The two primary reasons why plants are engineered are to allow them to either drink poison, or produce poison.

Poison drinkers are called herbicide tolerant. Their DNA is outfitted with bacterial genes that allow them to survive otherwise deadly doses of toxic herbicide. The first five crops on the list above have herbicide tolerant varieties. The poison producers are called Bt crops. Inserted genes from the soil bacterium Bacillus Thuringiensis produce an insect-killing pesticide called Bt-toxin in every cell of the plant. That is found in corn and cotton. The papaya and squashes have virus genes inserted, to fight off a plant virus. All GM crops are linked to dangerous side effects.

GM foods are particularly dangerous for pregnant women and children. After GM soy was fed to female rats, most of their babies died—compared to a 10% deaths among controls fed natural soy.² GM-fed babies were smaller, and possibly infertile.³

In Haryana, India, most of those buffalo that did consume GM cottonseed ended up with reproductive complications such as premature deliveries, abortions, and infertility; many calves died. About two dozen US farmers said thousands of pigs became sterile from certain GM corn varieties. Some had false pregnancies; others gave birth to bags of water. Cows and bulls also became infertile.

Eating poison in every bite

When insects take a bite out of the corn and cotton plants engineered to produce Bt-toxin, their stomach splits open and they die. Because that same toxin is used in its natural bacterial state as a spray by farmers for insect control, biotech companies claim that it has a history of safe use and can be incorporated directly into every plant cell.

The Bt-toxin produced in GM plants, however, is thousands of times more concentrated than natural Bt spray, is designed to be more toxic, has properties of an allergen, and cannot be washed off the plant.

Moreover, studies confirm that even the less toxic natural spray can be harmful. When dispersed by plane to kill gypsy moths in Washington and Vancouver, about 500 people reported allergy or flu-like symptoms.¹, ¹¹ The same symptoms are now reported by thousands of farm workers from handling Bt cotton throughout India.¹²

Soon after GM soy was introduced to the UK, soy allergies skyrocketed by 50%. Ohio allergist Dr. John Boyles says “I used to test for soy allergies all the time, but now that soy is genetically engineered, it is so dangerous that I tell people never to eat it.”

GM soy, corn, and papaya contain new proteins with allergenic properties.¹ In addition, GM soy has up to seven times more of a known soy allergen.¹ Perhaps the US epidemic of food allergies and asthma is a casualty of genetic manipulation.

In lab studies, twice the number of chickens fed Liberty Link corn died; 7 of 40 rats fed a GM tomato died within two weeks.²¹ Those rats had refused to eat the tomato and had to be force fed.

Worst finding of all—GMOs remain inside of us

The only published human feeding study revealed that even after we stop eating GMOs, harmful GM proteins may be produced continuously inside of us; genes inserted into GM soy transfer into bacteria inside our intestines and continue to function.²² If Bt genes also transfer, eating GM corn chips might transform our intestinal bacteria into living pesticide factories.

According to documents released from a lawsuit, in 1991–92 scientists at the FDA repeatedly warned that GM foods might create allergies, poisons, new diseases, and nutritional problems.²³ But the White House ordered the agency to promote biotechnology, and Michael Taylor, Monsanto’s former attorney, headed up the FDA’s GMO policy. That 1992 policy—still in effect today—declares that no safety studies on GMOs are required. Monsanto and other producers determine if their foods are safe. Taylor later became Monsanto’s vice president, and was reinstalled at the FDA in 2009 by the Obama administration as the US Food Safety Czar.

Opting out as guinea pigs

Biologist Dr. David Schubert of the Salk Institute says, “If there are problems [with GMOs], we will probably never know because the cause will not be traceable and many diseases take a very long time to develop.” In the 9 years after GM crops were introduced in 1996, Americans with three or more chronic diseases jumped from 7% to 13%.² Allergies doubled in less time. And the incidence of low birth weight babies, infertility, and infant mortality are all escalating. But without any human clinical trials or post marketing surveillance, we may never know if these or other disorders like autism, obesity, and diabetes, are triggered or made worse by GMOs.

We don’t need to wait for more research to learn our lesson from the animals and the doctors. Consult the Non-GMO Shopping Guide (www.NonGMOShoppingGuide.com) to learn how to avoid GMOs. Even a small percentage of people choosing non-GMO brands could force the food industry to remove all GM ingredients. By doing so, you are not only being careful about your own health, you are being compassionate to the environment and future generations—since GMOs wreak long-term havoc in our ecosystem as well.

9 See for example, A. Dutton, H. Klein, J. Romeis, and F. Bigler, “Uptake of Bt-toxin by herbivores feeding on transgenic maize and consequences for the predator Chrysoperia carnea,” Ecological Entomology 27 (2002): 441–7; and J. Romeis, A. Dutton, and F. Bigler, “Bacillus thuringiensis toxin (Cry1Ab) has no direct effect on larvae of the green lacewing Chrysoperla carnea (Stephens) (Neuroptera: Chrysopidae),” Journal of Insect Physiology 50, no. 2–3 (2004): 175–183.