BEFORE YOU HEAD OUT THE DOOR THIS WEEKEND TO CELEBRATE FREEDOM,

WHY DON’T YOU SUPPORT IT? 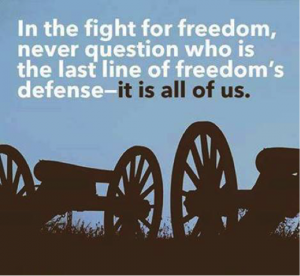 Having just achieved a spectacular and unexpected victory at the recent Codex Committee on Food Labelling meeting in Ottawa, Canada where your organization – the National Health Federation – was a key player in blocking the toxic definition of “Biofortification” (which deceptively hides GMO foods inside foods we’d think were organic) from being approved by Codex, NHF now prepares to attend the Codex Alimentarius Commission meeting in Geneva, Switzerland this month to make sure that your health rights are further defended.

People get very upset when they are deceived. And at the international Codex meetings where the special interests behind GMO foods have strongly pushed for a definition of “Biofortification” that would include genetically engineered foods to be called “biofortified.” This deceptive strategy fits in very nicely with the current labeling scheme in the United States where GMO foods can now be called “Bioengineered.” As though they were actually good for us!

At the last Codex meeting, held in Canada, in mid-May, NHF argued powerfully against the deceptive Biofortification definition. And you will be happy to know that we won. The CCFL decided that the definition of “Biofortification” is unnecessary and will not go forward.

Strategically, this critical debate item was raised at the very first morning session of CCFL when many had jet lag, were stumbling in late, or were still getting coffee and getting settled in. Not us – NHF was prepared, in our seats, and requesting the floor to do battle against the giants behind GM foods; all for our faithful members and the 7 billion around the World who would see their health ruined if we lost. Ironically, at the Codex Nutrition Committee meeting in Berlin last November, the U.S. head of delegation had declared that its adoption was “inevitable.” Your own government, if you live in the U.S. was willing to roll over to Big Food and sell you out. We disagreed with him and of course kept fighting. And we proved him wrong!

But it was a cliffhanger. NHF had been debating this definition with other delegations since 2012. On behalf of NHF members, I argued the first time that including GMO foods under the “biofortification” label would be disastrous for consumers. (See my argument at https://youtu.be/iTaJNMYmw70) I then argued, among other things, that leaving it up to national authorities would dilute one of the major goals of Codex, which is harmonization of food standards across country borders, and that if the definition were to go forward at all, then it should be without GM foods included within the definition. (See again at https://youtu.be/jXa84XVamHU)

NHF won and the GMO producers lost – at least this time. And that’s what counted. NHF has never flinched from going against the Codex crowd, willing to take industry on head-to-head unlike many delegates there, including the U.S. We are there for YOU. To protect and preserve your health, not to cozy up with contemptible drug-peddlers and their pet government regulators.

The point is that NHF played a key role in stopping a deceptive definition from being adopted by Codex that would have permitted GMO to be sold under the label “Biofortified” worldwide. Your faithful financial support has made this victory possible.

Every one of YOU who are NHF members and donors can take credit for this latest victory. NHF could not have been there without your support. NHF is Your Voice for Health FreedomTM and we have been protecting you for decades! 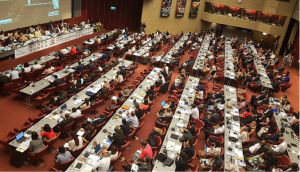 I’VE BEEN DOING THIS FOR A VERY LONG TIME NOW

I’ve been protecting you for years, an NHF member since 1986, Board member since 1989, and NHF President now for 12 years. I’ve attended Codex meetings for 19 years straight! Because of these many years with NHF and Codex, I know that NHF IS THE ONLY ONE THAT IS ABLE TO ACTIVELY IMPACT GLOBAL POLICY FOR YOUR HEALTH. And this is because long ago I obtained the seat for NHF at the global seat of power: Codex Alimentarius. This is where your health is parceled out, across international lines. I arranged for NHF to speak for you. There is literally no other health-freedom group there at Codex, not even in the parking lot holding up a sign!

In short, I know that you need protecting and that is what NHF has been doing for over 64 years now, in many different arenas, and what, with your help, we intend to keep doing. NHF has been working for your health and the health of your family since 1955 – the very FIRST health-freedom organization to go to bat against the AMA and Big Pharma, Big AG, and all the rest. (You can read of our Accomplishments from 2008 to 2018.)

ACT NOW TO SAVE YOUR HEALTH!

NHF is dedicated to individual liberty, individual dignity, and individual responsibility. We have several major Codex meetings and battles ahead of us. It is absolutely urgent to act – not just to care – right now. NHF is already preparing to go next week to fight pesticides, overuse of antibiotics, and other vital health issues at the upcoming Codex Alimentarius Commission meeting in July 8-12 in Geneva, Switzerland. And after that, there are other Codex Committees NHF must attend, with the same fierce battles for your health; for your very life. We need your help to be able to go to these meetings, to speak for you as Your Voice for Health FreedomTM.

Today, I am asking you to help us once again to Replenish the NHF War Chest for the upcoming Health-Freedom battle in Geneva and beyond. Even though we are HEAVILY outgunned financially by the Drug Peddlers and other big corporate fat cats, and government bureaucrats spending taxpayers’ dollars, we have been able to fight effectively and constantly for your Health Freedom over the decades.

I need to please hear from you today. Then I ask you to please forward this email and share it with five others – loved ones and friends you personally want to see protected and not exposed to killer-poisons in their food.

Thank you for caring and for trusting us to help protect you and your family. We are going up against the Big Players and their lap-dog “regulators” and winning!

P.S. The NHF is the oldest & best-respected Health Freedom group fighting for your health-freedom choices, access to dietary supplements, nutritional foods, and for the preservation of the small farmer and organic food producers. With your help, we can expand to help preserve Health Freedom in America, Canada, Europe, and around the Globe.

P.P.S. If you aren’t a member of the NHF, what’s stopping you? Join today! When you join NHF, then you will get as another benefit our flagship magazine, Health Freedom News, so unique that a Barnes and Noble rep said there was nothing like it in the World. The magazine is eagerly snatched up at every expo & show where it is exhibited, as are copies of our book Codex Alimentarius – Global Food Imperialism.